SEOUL, South Korea, June 22, 2018 /PRNewswire/ -- The 'GRUUT NETWORKS' (henceforth referred to as GRUUT), a next-generation, newly launched blockchain that aspires towards complete decentralization, took part in the 'BAIConf' (Blockchain Alernative Investment Conference), which was held for two days in London, England, on the 18th and 19th of June. 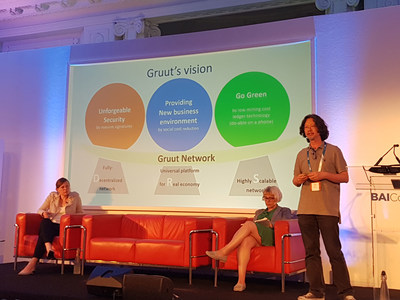 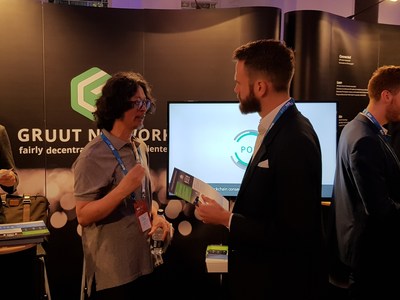 The 'BAIConf' is the only Blockchain alternative investment conference in the world that focuses on institutional investors, hedge funds, sovereign wealth funds, private banks, individual operators, and the ultra-rich. The total amount of available assets of all the investors that attended this conference added up to a truly astronomical amount of 750 billion US dollars.

A large number of notable figures attended this year's conference, including Jon Matonis (CEO of Globitex, a global bitcoin exchange), Ryan Radloff (CEO of CoinShares, a company specializing in cryptocurrency investment and research), Joon Ian Wong (CEO of CoinDesk, a news site specializing in bitcoin and digital currencies), Jin Jeong (portfolio manager of GIC -- Government Investment Company of Singapore), and many other renowned leaders of the blockchain industry.

'GRUUT' is an innovation team led by team leader Professor DaeHun Nyang of the Department of Computer Engineering at Inha University. As the sole Asian team that took part in this event with an agreement protocol, Professor Nyang and his team succeeded in garnering the attention of the rest of the attendees. Professor Nyang also gave a lecture entitled, "Fully Decentralized Public P2P Ledger." He has published over two hundred papers in leading journals all over the world and has also registered more than eighty patents both at home in Korea and abroad.

In his lecture, Professor Nyang explained that, "If a new blockchain ecosystem can be activated with GRUUT, the technical limitations of PoW-, PoS-, and DPoS-based cryptocurrency systems can be overcome," and also that, "Because GRUUT is a P2P platform that is run without computing power or stakes by nodes whose identities have been authenticated, it cannot be dominated by small groups, which will allow true decentralization to be achieved."

He went on to explain that, "GRUUT's mining costs are significantly lower than those of existing PoW-, PoS-, and DPoS-based platforms. This will enable nodes to participate even through smartphones, which will result in lowered costs for transactions that occur in the network to allow small-value transactions to flourish. This means that GRU, the GRUUT-based cryptocurrency, can be utilized extensively in on/offline payments."

As a next-generation public blockchain that utilizes a new consensus algorithm PoP (proof of population), GRUUT aims to construct a new blockchain ecosystem that balances perfectly with the real world. Breaking away from previous methods of authenticating computing powers and stakes, GRUUT introduces a new way of authenticating participants that eliminates the technical issues that existing cryptocurrencies suffer from, promising to achieve true decentralization and democracy.

A representative from the GRUUT team said, "A large number of the conference attendees visited the GRUUT booth after Professor Nyang's lecture, and a few of them even signed a declaration of intent to invest on the spot. We received a flood of interest from investors, to the point where we were forced to change all of our post-conference schedules in order to accommodate the sheer number of investors who requested meetings afterwards.

The GRUUT NETWORKS is a next-generation, PoP-based public blockchain. PoP (proof of population) uses the authentication of the identity of nodes to enable the nodes to participate freely in the network and to receive fair rewards. For the rewards, the GRUUT NETWORKS distributes GRU coins equally.

The local chain and Internet chain protocol, which do not require hash calculations, provides a higher TPS (transaction per second) than other existing blockchain platforms. This results in near-zero transaction costs and has the potential to attract countless DApps that are looking for high expandability and low blockchain infrastructure costs. Other core features are the elimination of price volatility in real-world commercial transactions and the provision of transparent and traceable currency transactions to financial and government institutions. The GRUUT NETWORKS is striving towards a completely different blockchain ecosystem that lies in harmony and balance with the real world.