The Government of Japan has hosted a business roundtable in Paris with French and Japanese business leaders, entrepreneurs and innovators to discuss the opportunities for French startups to take advantage of Japan's evolving startup ecosystem and changing corporate innovation environment. 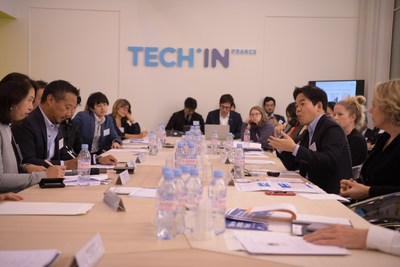 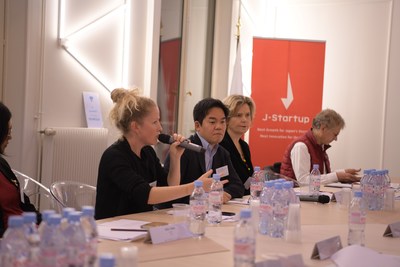 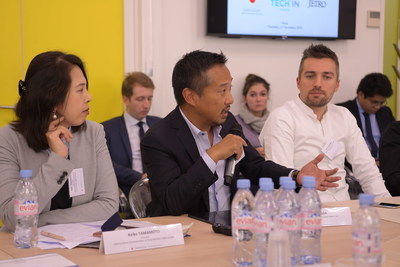 Titled "Open for Business: Taking Advantage of Japan's Growth Opportunities," the event was supported by the Japan External Trade Organization (JETRO) Paris and held in collaboration with Tech In France.

The engaging roundtable discussion was moderated by journalist Christine Colmont, and featured Ren Ito, Chief Executive Officer of Mercari Europe; Kei Shimada, Director of Innovation and Leader of Digital Makers Lab, IBM Japan; and Joanna Kirk, co-founder of Startup Sesame, one of the largest alliances of Tech events in Europe.

More than a dozen entrepreneurs and leaders from France's startup scene joined the conversation with their counterparts from Japan. The group discussed how Japan's startups are evolving and corporations are striving to strengthen their ecosystem for increasingly global collaboration, as well as how French startups can take advantage of the changing business climate in Japan.

As the world's third largest economy, Japan has focused on strengthening innovation ecosystems to incorporate external dynamism beyond its borders. The business-friendly Abenomics policy initiative has developed a more effective regulatory environment for corporate transformation and startup support. This year, the Government of Japan also launched the startup support program named J-Startup, aiming to promote overseas development of Japanese startups and creation of unicorns.

As demonstrated by the success of Mercari, a J-Startup company, Japan's startup scene is changing. Open innovation has been accelerated across the globe and IBM Japan, a J-Startup supporter company, is also taking actual steps by building a collaborative innovation ecosystem to supercharge the growth of global startups by matching their innovative products with IBM assets such as cognitive, analytics and cloud services, to cater to the needs of clients around the globe.

The J-Startup program not only incubates globally competitive startups, but also invites and supports inbound startups and entrepreneurs. It aligns with the cooperative commitment to support startups signed in July 2018 between the Japanese and French governments.

Ren Ito, Chief executive Officer, Mercari Europe, comments: "When Mercari was founded there was no large consumer to consumer market, so our approach was to create this new market and identify our core users. Working in partnership with these new markets and being part of an ecosystem where businesses could easily collaborate supercharged our growth. Our customers now spend as much time on our app as they do on social media, so we've become not just being a transaction site but also a social network where we add unique value to the consumer journey."

Kei Shimada, Director of Innovation, Leader of Digital Makers Lab, IBM Japan, comments: "In addition to our highly successful accelerator IBM BlueHub, which is a partner in the J-Startup initiative, IBM Japan's newest innovation arm called Digital Makers Lab is now igniting a startup collaboration program, eyeing a holistic partnership with accelerators, venture capital firms and universities from around the globe to co-create new solutions for our clients. As France has a head start in nurturing startups that have global competitiveness, we look forwards to exploring opportunities that will mutually benefit clients in both countries as well as its startups."

Joanna Kirk, Co-founder of Startup Sesame, Managing Director of StartHer and Chapter lead at Techfugees France, says: "The French start-up ecosystem is incredibly exciting. Paris has put itself on the map when it comes to startups and innovation, which is partly due to a change of mindset from French entrepreneurs and the business community and the many initiatives put in place by public organisations and the tech community. There is a real opportunity for increased business partnerships between French and Japanese startups, especially by building communities to coordinate key strengths and better understand new audiences and markets."

The Government of Japan continues to transform its market into a high-quality business environment to meet the needs of worldwide businesses by providing world-leading, high-value business environment that enables companies to expand and thrive. The country is generating new and exciting opportunities in an economy that is aligning its regulations with those of other advanced economies to enable seamless transition for companies ready to expand into new growth markets.

Please click here to learn more about the Government of Japan.