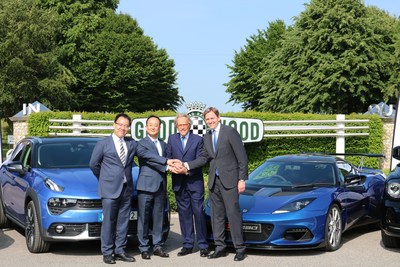 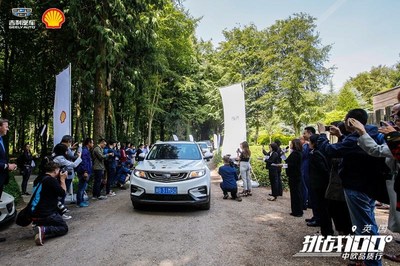 The "Challenge 100 Degrees - Geely Goes Global, Powered by Shell" European Tour came to a conclusion at the iconic center of British motorsport in Goodwood. At the same time, Geely Auto Group and Shell signed a global strategic cooperation agreement broadening their cooperation beyond just lubricants. The conclusion of the jointly organized tour and signing of a new cooperation agreement represents Geely Auto's active participation in global market, sharing of strategic opportunities on the "One Belt and One Road" and acceleration of the company's goal to become a top ten global automaker.

After more than a month of travelling from from Xi'an, China, the fleet of new Geely Bo Yue cars arrived at Goodwood for the closing ceremony of the "Challenge 100 Degrees" tour. The drive passed through 58 cities in 9 countries and stopping in Moscow, Minsk, Hamburg and Paris and finally Goodwood, UK. At the Goodwood Manor, they were warmly welcomed by Mr. An Conghui, President and CEO of Geely Auto Group, Mr Huibert Vigeveno, Executive Vice President of Global Commercial at Royal Dutch Shell and a fleet of cars from the Geely family of brands including Lotus, LEVC, and Lynk & Co.

The team faced more than a dozen kinds of difficult road conditions and travelled 108 degrees of longitude through three different climate zones to complete the unprecedented journey. Not only did the "Challenge 100 Degrees" tour demonstrate the Bo Yue's ability to travel across the globe, it also demonstrated the car's quality, craftsmanship, and character to the world, as well as the strength of Chinese auto brands.

The Bo Yue has sold more than 500,000 units within 25 months of its launch, topping SUV sales in China. During the "Challenge 100 Degrees" tour, the Bo Yue challenged tanks to a race in Moscow, was tested in the Shell Technology Centre Hamburg, competed in the motorsports holy land of the Nürburgring track, and in Goodwood conducted off-road test drives that proves what has been said about the Bo Yue is not just hype.

In 2018, Geely plans to set up a new design studio in the UK to support Lotus as well as a new R&D centre in Europe that will become part of an innovative development system consisting of five major R&D centres and five major design studios around the world.