LOS ANGELES, June 29, 2017 /PRNewswire/ -- ALL GLORY TO THE HYPNOTOAD! Jam City, via its game studio TinyCo, and FoxNext Games announced that their mobile game Futurama: Worlds of Tomorrow is available TODAY on the App Store and Google Play. TinyCo has released two new animated trailers alongside the game, one of which reveals the game's all-new story created by Matt Groening, David X. Cohen, and the FUTURAMA writers. This story sets the stage for a galactic adventure that will take players across the universe in search of ancient alien artifacts to restore the fabric of spacetime after it is transformed by one of the universe's most recognizable yet enigmatic creatures: the Hypnotoad. 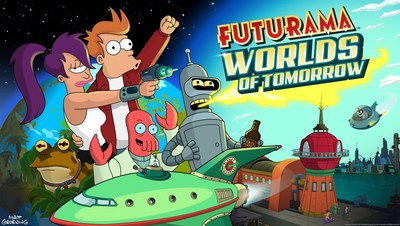 "Hypnotoad has always been one of Futurama's most mysterious amphibians," said Matt Groening. "In this game we finally get to learn much more about his bizarre abilities and mating habits. Perhaps too much more."

Created in partnership with FUTURAMA creator and Executive Producer Matt Groening and his Curiosity Company, along with Executive Producer David X. Cohen, original FUTURAMA writers, and Rough Draft Studios, Futurama: Worlds of Tomorrow blends simulation, combat, galactic exploration, and choose-your-own-adventure gameplay together to bring the escapades of the Planet Express crew to life. Players will experience new stories from the writers of FUTURAMA that are filled to the brim with the wit, charm, and sci-fi hijinks that fans have come to know and love. Today's launch is just the beginning for Futurama: Worlds of Tomorrow, however, as the game will be updated with new characters, quests, and stories every week.

"Bringing FUTURAMA back in such a new and ambitious form was extremely difficult," said David X. Cohen, FUTURAMA Co-Developer and Head Writer. "Especially for the people I was bossing around and yelling at."

Jam City:  Licensed and Original IPIn addition to its popular original IP games such as Cookie Jam and Panda Pop, Jam City has made a science out of turning some of the world's largest entertainment franchises and brands into hit mobile games. The mobile gaming publisher is the creator of 6 of the Top 100 Highest Grossing games played nationwide across both iPhone and Android devices.

"We are Futurama fanatics," said Chris DeWolfe, co-founder and CEO of Jam City. "As such, it is quite an honor for us to collaborate so closely with Matt Groening and David X. Cohen on Futurama:  Worlds of Tomorrow."

"Jam City has a unique heritage of translating original TV brands, like Futurama, into mobile gaming platforms that will be played by tens of millions of fans worldwide," DeWolfe continued. "By blending contemporary culture and science fiction, we have created a next gen mobile experience for core fans and those who are new to Futurama. We could not be more thrilled to continue the Futurama story here at Jam City."

Futurama: Worlds of Tomorrow is free to play and is available NOW on mobile devices via the App Store and Google Play. To connect with FUTURAMA fans and developers, please visit: www.fb.com/playfuturama, www.twitter.com/playfuturama, and www.JamCity.com.

About FuturamaFUTURAMA focuses on the life of PHILIP J. FRY (Billy West), a 25-year-old pizza delivery boy who accidentally freezes himself on December 31, 1999 and wakes up 1,000 years later with a fresh start at life at Planet Express, an intergalactic delivery company. There, he meets a cast of characters, including love interest LEELA (Katey Sagal), a sexy cyclops with anger management issues, best friend BENDER (John DiMaggio), a beer-powered kleptomaniac robot, PROFESSOR FARNSWORTH (Billy West), a brilliant yet forgetful scientist and intrepid inventor, HERMES (Phil LaMarr), the company's detail-oriented bureaucrat, AMY (Lauren Tom), an intern who is as cute as she is klutzy, and ZOIDBERG (Billy West), a lobster-like, self-proclaimed expert on humans. Throughout their adventures, the team encounters MOM (Tress MacNeille), the foul-mouthed owner of MomCorp, ZAPP BRANNIGAN (Billy West), the vain, self-absorbed captain of the starship Nimbus, and many others. Just as it is today, life in the future is a complex mix of the wonderful and horrible, where things are still laughable no matter how wild and crazy they get. Fry's introduction to life in New New York includes a visit to The Head Museum, where the heads of humanity's most renowned and influential people live on. Against a backdrop of pesky aliens, exasperating robots, and malfunctioning gadgets, Fry finds that people still struggle with the same daily anxieties of life and love. FUTURAMA, the Emmy Award-winning series created by Matt Groening, is produced by Twentieth Century Fox Television in association with The Curiosity Company, with animation produced by Rough Draft Studios, Inc. Groening, David X. Cohen, and Ken Keeler serve as executive producers. FUTURAMA is distributed by 20th Century Fox Television Distribution.