LOS ANGELES, Sept. 14, 2017 /PRNewswire/ -- WOOP WOOP… Jam City, via its game studio TinyCo, FoxNext Games, and Matt Groening released a FUTURAMA double-length podcast episode today, created by Matt Groening, David X. Cohen, and the FUTURAMA writers. The new episode, which features the original cast and clocks in at a whopping 42-minutes in length, is now live at nerdist.com, soundcloud.com, and Spotify, where it can be downloaded and listened to for free. Existing Futurama: Worlds of Tomorrow players have already been enjoying original content from the podcast, and new players can join the fun with exclusive episode content in-game, including a space mission to Junkleon 7, the deleted file planet. 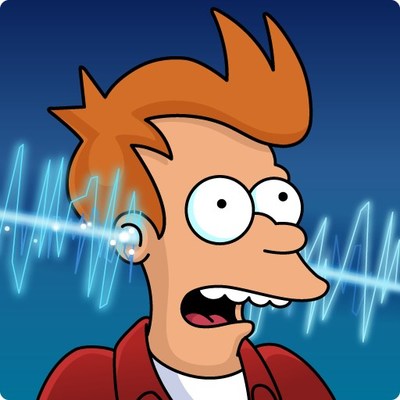 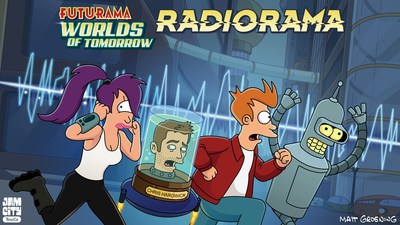 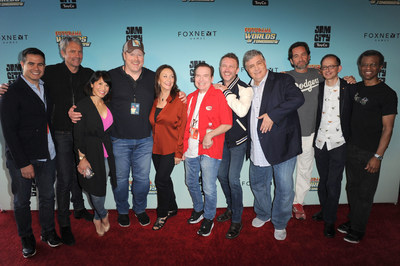 The new FUTURAMA podcast episode brings a long-awaited reunion of the Planet Express crew, including Fry, Bender, Leela, Professor Farnsworth, Zoidberg, Amy, and Hermes—plus Borax Kid, Calculon, and the return of the popular robot soap opera, "All My Circuits." While on a routine mission to Junkleon 7, the crew encounters Klaxxon, a nefarious life form composed entirely of soundwaves from 21st-century podcasts. Can the crew save Earth from Klaxxon's harmful soundwaves? To find out more, download the podcast and discover for yourself!

"Last year I cornered two fine gentlemen--Matt Groening and David X. Cohen--and pitched the idea of doing a new FUTURAMA episode as a podcast/radio play because it's one of my favorite things AND I NEED MORE OF IT," said Chris Hardwick. "Today I am drooling with unfiltered joy to say that a) it's actually happening, b) I got to voice the villain (Klaxxon), and c) I'm a freaking head in a jar in Futurama: Worlds of Tomorrow, a game I've been feverishly playing since it came out. Galaxies of thanks to Matt, David and TinyCo for acquiescing to the maniacal ravings of a well-meaning fanboy."

The episode came to life after the FUTURAMA team was reunited to create original content for Futurama: Worlds of Tomorrow. The experience was so positive and fan interest so strong that Jam City and TinyCo collaborated with Matt Groening, writers from the show, and the cast to bring fans a brand-new FUTURAMA podcast episode that was integrated with the game for an extended digital experience.

"FUTURAMA has set off a strangely sci-fi-ish paradox where the episodes inspired the Futurama: Worlds of Tomorrow game, and now the game is inspiring new episodes," said David X. Cohen. "Hooray for infinite loops!"

Created in partnership with Jam City, FUTURAMA creator and Executive Producer Matt Groening and his Curiosity Company, along with Executive Producer David X. Cohen, original FUTURAMA writers, and Rough Draft Studios, Futurama: Worlds of Tomorrow blends together simulation, combat, galactic exploration, and choose-your-own-adventure gameplay to bring the escapades of the Planet Express crew to life. Players will experience new stories from the writers of FUTURAMA that are filled to the brim with the wit, charm, and sci-fi hijinks that fans have come to know and love.

"It's a new step for entertainment when a mobile game format can inspire original narrative content at this level," said Chris DeWolfe, co-founder and CEO of Jam City. "Partnering with Matt Groening and his Curiosity Company to launch the mobile game, Futurama: Worlds of Tomorrow, and to be a part of the resulting double episode Podcast of original FUTURAMA content from Matt, David X. Cohen, Chris Hardwick, the show writers, and cast has been a great experience. The Jam City team has had a blast inspiring this new chapter in the FUTURAMA multiverse."

Fans can listen to and download the new FUTURAMA podcast for free at nerdist.com, soundcloud.com, and spotify.com.

Futurama: Worlds of Tomorrow is free to play and is available on mobile devices via the App Store and Google Play. To connect with FUTURAMA fans and developers, please visit www.fb.com/playfuturama, www.twitter.com/playfuturama, and www.JamCity.com.

About FuturamaFUTURAMA focuses on the life of PHILIP J. FRY (Billy West), a 25-year-old pizza delivery boy who accidentally freezes himself on December 31, 1999 and wakes up 1,000 years later with a fresh start at life at Planet Express, an intergalactic delivery company. There, he meets a cast of characters, including love interest LEELA (Katey Sagal), a sexy cyclops with anger management issues, best friend BENDER (John DiMaggio), a beer-powered kleptomaniac robot, PROFESSOR FARNSWORTH (Billy West), a brilliant yet forgetful scientist and intrepid inventor, HERMES (Phil LaMarr), the company's detail-oriented bureaucrat, AMY (Lauren Tom), an intern who is as cute as she is klutzy, and ZOIDBERG (Billy West), a lobster-like, self-proclaimed expert on humans. Throughout their adventures, the team encounters MOM (Tress MacNeille), the foul-mouthed owner of MomCorp, ZAPP BRANNIGAN (Billy West), the vain, self-absorbed captain of the starship Nimbus, and many others. Just as it is today, life in the future is a complex mix of the wonderful and horrible, where things are still laughable no matter how wild and crazy they get. Fry's introduction to life in New New York includes a visit to The Head Museum, where the heads of humanity's most renowned and influential people live on. Against a backdrop of pesky aliens, exasperating robots, and malfunctioning gadgets, Fry finds that people still struggle with the same daily anxieties of life and love. FUTURAMA, the Emmy Award-winning series created by Matt Groening, is produced by Twentieth Century Fox Television in association with The Curiosity Company, with animation produced by Rough Draft Studios, Inc. Groening, David X. Cohen, and Ken Keeler serve as executive producers. FUTURAMA is distributed by 20th Century Fox Television Distribution.

About NerdistNerdist is a multi-platform channel for fans of genre and popular culture content. Founded by CEO Chris Hardwick, its online presence includes Nerdist.com, featuring Nerdist News hosted by Jessica Chobot, weekly shows Because Science and The Dan Cave, and daily in-depth editorial coverage; a Podcast Network including the flagship Nerdist Podcast; and The Nerdist School comedy training program. Nerdist reaches millions of people every day, and its content can be found on leading platforms including Alpha, YouTube, Facebook, and Spotify. Nerdist is owned by Legendary Entertainment and is part of the Legendary Digital Networks, which also includes Geek & Sundry and Amy Poehler's Smart Girls.