There's a new game in town - Queen Rules  - a brand-new deck of cards in which for the first time the queen outranks the king. 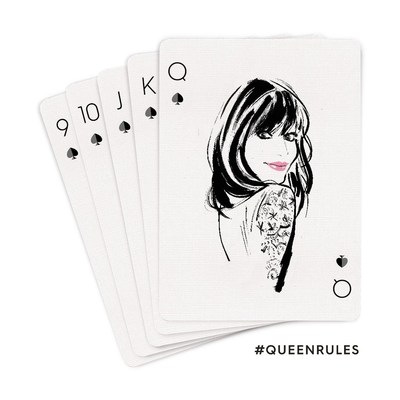 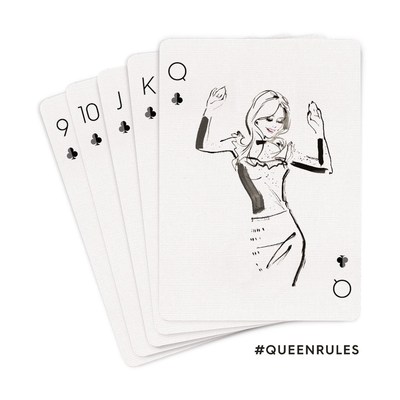 It's been created for (and endorsed by) International Women's Day and launches today, Thursday 8 March.

To celebrate some of the UK's queens of TV, bespoke cards have been created depicting (pictured) Holly Willoughby and (pictured) Claudia Winkleman, as well as others including Alison Hammond, Tess Daley, Victoria Derbyshire and Janet Street-Porter.

And there's also a new deck of cards created by some of the world's leading women illustrators (from womenwhodraw.com) which celebrate women of all shapes, sizes and colour.

The project is the brainchild of agency FCB Inferno, inspired by a five-year-old girl asking why a king should be more powerful than a queen in a card game. Queen Rules is the result, designed to create awareness of unconscious gender bias and get the conversation on the table.

With support from Unibet, the campaign will launch with simultaneous live events and tournaments of Queen Rules poker today, March 8th in London and Europe.

A social experiment film will be released simultaneously.

All proceeds from the live events and merchandise, including T-shirts, art prints and playing cards, will be donated to HeForShe, a solidarity campaign for the advancement of women initiated by UN Women.

For examples of how to play, and which games work with Queen Rules, visit queenrulesproject.com or join the conversation with #QueenRules.

FCB Inferno is the London agency of global advertising network FCB. The network dates back to 1873, and now has 9,000 employees in 90 countries, with 200 at FCB Inferno.

One of London's leading advertising agencies, FCB Inferno focuses on creating 'Never Finished' campaign ideas for clients that reflect a deep understanding of the brand's past, a respect for the present and an anticipation of the future potential.

FCB Inferno's clients sit across industry sectors and currently include the UK Government (for which they created the This Girl Can brand), BMW, NIVEA, Sky, Huawei and UEFA. FCB Inferno received two Grand Prix awards at Cannes International Festival of Creativity in 2015 and 2016.

FCB Inferno has been voted the top UK agency promoting good causes in 2016 by The Good Report, ranking third overall in the list of international agencies.