MILAN, July 21, 2021 /PRNewswire/ -- Campari, the iconic Italian aperitif, announces the return of Campari Red Diaries with Fellini Forward; a pioneering project exploring the late Federico Fellini's creative genius using new technology and machine learning to emulate the works of one of the greatest filmmakers of all time in a new and unique short movie set in Rome. A one-of-a-kind documentary following the process will be launched at Venice Film Festival on the 7th September and New York Film Festival on the 29th September. The documentary will then be released on an on-demand (SVOD) platform in selected markets allowing everyone to explore the future of cinema and creativity. 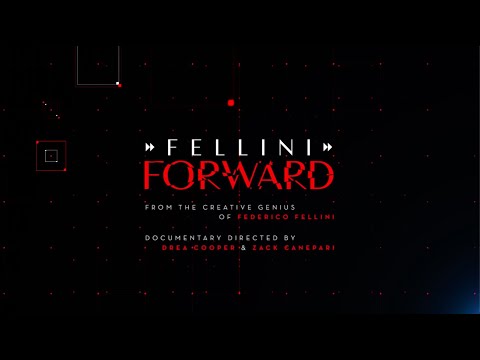 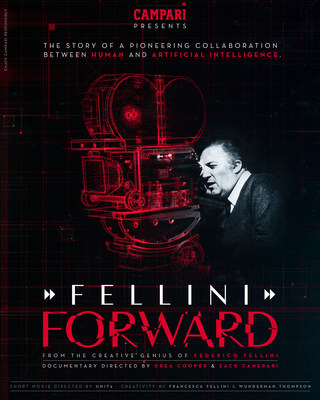 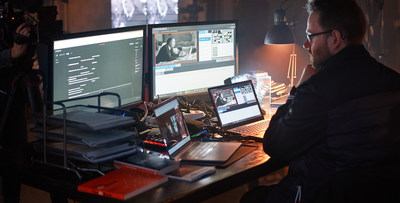 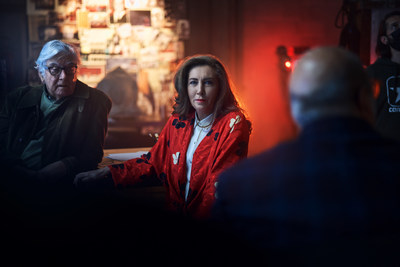 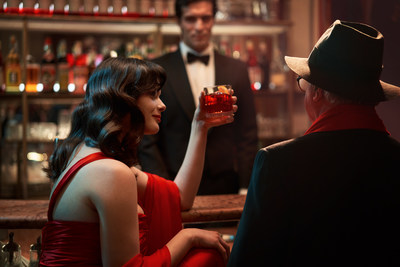 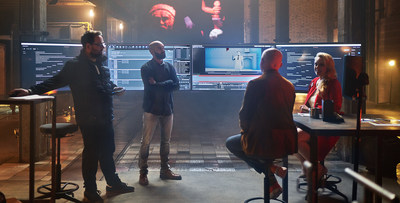 Since its creation, Campari has pushed the boundaries of creativity to go beyond the norm, unlocking the passions and talents of artists across different fields in the path to creation. From world famous names, through to young and emerging talents, the relationship between Campari and the arts, especially cinema, has grown strong over the years. Having worked on an advertisement with Federico Fellini, for one of his few brand collaborations in 1984, in 2021 Campari Red Diaries: Fellini Forward continues the brand's legacy, marrying both creativity and innovation within the cinema industry with the most forward-looking technology. Thanks to a team of experts from production and innovation studio UNIT9, dedicated Artificial Intelligence tools were explored and developed to unearth Federico Fellini's creative genius in ways that had never yet been attempted until now. Francesca Fabbri Fellini, Fellini's niece, was involved in the project from the start together with Directors Zackary Canepari and Drea Cooper (documentary), Maximilian Niemann (short film) and wider crew, introducing them to some of Fellini's key colleagues, sharing counsel and first-hand knowledge of her uncle as well as contributing to the casting, costume design and script writing for the short film. This seamless collaboration between human and Artificial Intelligence showcases how the sentimental and the rational, the emotional and data-driven can come together to create a brand-new piece of art.

On the project Francesca Fabbri Fellini comments: "My Uncle Federico was original in his ways of representing life using dream-like elements as his means of communication. I think a project like this is a perfect way to honour his legacy. Though he took much inspiration from his past, he was always looking ahead. A similar approach was taken for this project with Campari; it is rooted in heritage yet is futuristic with the use of Artificial Intelligence."

Throughout the process, original members of Fellini's crew were involved and consulted, providing key insights on the Maestro's oeuvre. This included Fellini's camera operator Blasco Giurato (The Clowns, 1970), his three-time Oscar winning set designer Dante Ferretti (Orchestra Rehearsal, 1978; City of Women, 1980; And the Ship Sails On, 1983; Ginger and Fred, 1986; The Voice of the Moon, 1990) and Luigi Piccolo, Director of Sartoria Farani, a renowned Italian tailor shop which holds restored costumes from some of Fellini's greatest films including Satyricon (1969), The Clowns (1970) and Amarcord, (1973). Each were conferred to define what in the endeavour could or could not be perceived as Felliniesque. The result culminated in a fascinating short movie, set in the heart of Rome that explores Fellini's life and dreams with distinctive signature characters and arrangements throughout.

Documentary Director duo ZCDC, Zackary Canepari and Drea Cooper, captured the making of this short film, inviting significant experts of Artificial Intelligence and creativity Marcus du Sautoy and Dr. Emily L. Spratt to join the set to share their opinion on the ground-breaking initiative. Hava Aldouby, Art Historian and Fellini expert as well as Anita Todesco, Galleria Campari curator were also consulted, providing an eclectic view on the subject at hand sparking debate around the role Artificial Intelligence can play in creativity and beyond.

Through the Campari Red Diaries 2021 Fellini Forward project, Campari aims to continue the legacy of innovation and creativity set out by its founders, inspiring future generations and creatives across the globe to unlock their own passions. Campari has also created a unique apprentice programme with students involved in the Fellini Forward futuristic projects from all over the world including Centro Sperimentale di Cinematografia (CSC) in Italy, The American Film Institute in Los Angeles and The International Academy of Audio-visual Sciences (CSIA) in Switzerland to explore the creative genius of Fellini, using the Artificial Intelligence technology and speaking to key members of the film crew at each stage of production to see first-hand how human minds collaborated with Artificial Intelligence to create the short film. "When on set for the shooting, I really felt that the locations, the atmosphere and the characters were Felliniesque! The most inspiring part of this project was the process itself. From start to finish, I saw a build-up of magic and fantasy that rang so true to the Maestro himself and his art" says Giulia Bonomelli, a Production Design graduate from CSC. Andrea Munafo, a Photography major adds "It was interesting to see how Artificial Intelligence could work side by side with human thinking. I still think that without a human touch, cinema could not exist."

Jean Jacques Dubau, Head of Marketing, Campari Group comments: "We are so pleased to be back with our Campari Red Diaries project in 2021, honouring the creative legacy of one of the greatest filmmakers of all times, Federico Fellini. At Campari we look to push the boundaries of innovation in creativity and have done so for over 160 years, with a view to leave a lasting legacy for future generations inviting them to explore their Red Passion, the urge of creativity that cannot be ignored. We hope that the endeavour of Fellini Forward will transport people in the past, and in the future, exploring creative genius in brand new ways, while enjoying an iconic Campari cocktail such as the Negroni."

Fellini Forward will be premiered at Venice Film Festival with a red-carpet event on the 7th September followed by a North American launch at New York Film Festival on the 29th September. The documentary will be available for everyone to view shortly after on an on-demand (SVOD) platform in selected markets. Please follow Campari's social media channels for further information @campariofficial.

To get a sneak peek behind the scenes of Fellini Forward, view the teaser video on YouTube here: https://bit.ly/Campari-Red-Diaries-Fellini-Forward

In 2017, Campari continued this legacy, working with world class talent and award-winning directors to create a series of iconic commercial and short movies as a means of communication, with the creation of Campari Red Diaries. Since the launch of the platform, Campari has worked with a high calibre of actors such as Clive Owen, Zoe Saldana, and Ana de Armas to bring to life the work of some of the world's best directors alive, including Paolo Sorrentino, Stefano Sollima and Matteo Garrone and this year, with this project the brand is taking it even further, collaborating with Documentary Director duo ZCDC to explore and pay homage to the creative genius of the late Federico Fellini, hand in hand with the latest new technologies of Artificial Intelligence.

Campari, the iconic, unforgettable Italian red spirit sitting at the heart of some of the world's most famous cocktails. Campari was founded in Milan in 1860 by Gaspare Campari, and pioneered by his son, Davide, who created something so distinctive and revolutionary that its secret recipe has not been altered since. Vibrant red in colour, Campari's unique and multi-layered taste is the result of the infusion of herbs, aromatic plants and fruit in alcohol and water. As well as being unique and distinctive, Campari is extremely versatile, offering boundless and unexpected possibilities. As a source of this passionate inspiration since its creation seen through its founders' creative genius, artists in different fields and the world's best bartenders, Campari stimulates your instincts to unlock your passions, inspiring limitless creations.

Campari Group is a major player in the global spirits industry, with a portfolio of over 50 premium and super premium brands, spreading across Global, Regional and Local priorities. Global Priorities, the Group's key focus, include Aperol, Appleton Estate, Campari, SKYY, Wild Turkey and Grand Marnier. The Group was founded in 1860 and today is the sixth-largest player worldwide in the premium spirits industry. It has a global distribution reach, trading in over 190 nations around the world with leading positions in Europe and the Americas. Campari Group's growth strategy aims to combine organic growth through strong brand building and external growth via selective acquisitions of brands and businesses. Headquartered in Milan, Italy, Campari Group owns 22 plants worldwide and has its own distribution network in 21 countries. Campari Group employs approximately 4,000 people. The shares of the parent company Davide Campari-Milano N.V. (Reuters CPRI.MI - Bloomberg CPR IM) have been listed on the Italian Stock Exchange since 2001. For more information: http://www.camparigroup.com/en Please enjoy our brands responsibly.

Making brands famous since '97, UNIT9 is a global innovation partner with the sole mission of creating astounding experiences at the intersection of world-class creativity, cutting-edge technology and impeccable craftsmanship. Built from a multidisciplinary team of visionaries, they are experts in experience and skilled across: Artificial Intelligence, Virtual and Hybrid experiences, Augmented Reality, Film & Animation, Product Design, Experiential, Emerging Technologies, Digital, Gaming and Experience Design. It's why AdAge crowned them Production Company of the Year in 2019 and Campaign anointed them Tech Company of the Year two years running in 2020 and 2021. From drawing on mountains with Twitter-controlled robots to deepfaking Lionel Messi and creating a 5G-enabled AR red carpet dress, UNIT9 are forever learning, testing, building and making, and have been at the bleeding-edge of innovation for over two decades. 200 people, 5 offices, 9 time-zones: One company, One Goal: Make Incredible Work.