LONDON and AUSTIN Texas, April 3, 2019 /PRNewswire/ -- A global automation report that surveyed nearly 5,000 business decision makers and knowledge workers reveals the majority of the latter (83 percent) are comfortable with reskilling in order to work alongside the digital workforce. A further 78 percent of knowledge workers say they're ready to take on a new job role, according to a new report called, "Automate or Stagnate: The Impact of Intelligent Automation on the Future of Work" from Blue Prism (AIM: PRSM).

This sentiment is contrary to a popularly held belief of the market and business decision makers (70 percent), that employees are afraid of losing their jobs to automation. In fact, only 37 percent of knowledge workers harbor fears about job loss as Robotic Process Automation (RPA) is having a positive impact on workplaces. One thing is certain, the impact of automation is being felt from the boardroom to the shop floor.

Most business decision makers also believe that RPA (88 percent) and Intelligent Automation (83 percent) are solutions to the global productivity problem and that both RPA (95 percent) and Intelligent Automation (93 percent) are crucially important in driving digital transformation. As evidence of the growing popularity of RPA, more than three-quarters of knowledge workers (78 percent) have experienced some of their daily tasks being automated in the last 12 months.

It's a good thing too. Over a third of knowledge workers (34 percent) don't believe their businesses can remain competitive in the next five years with a purely human workforce. This, alongside time-saving, cost-saving and improved accuracy benefits that automation offers, could be amongst the reasons why an incredible 92 percent of business decision makers plan to extend use cases of automation across their businesses.

"A new wave of economics, driven by automation and Artificial Intelligence, is emerging across the globe," says Chris Bradshaw, Blue Prism's Chief Marketing Officer. "This technology is disruptive, in the most positive sense. It is changing how organizations view themselves, how they operate and how the people that drive them, live and work. As we enter a new era of connected-RPA, this technology will open doors for the most digitally savvy employees to create and innovate. This is the first technological revolution to place the human at the heart of the creative value chain which is why it has such exponential potential. We will deliver a roadmap for how businesses can transform economic output, with AI and RPA at the heart of that change."

Change Doesn't Have to Be HardDespite the progress that has already been made, businesses need to address cultural considerations if they are to tap into the technology's latent potential. In order to increasingly incorporate RPA, two-thirds of knowledge workers agree that their businesses culture needs to evolve. This is because more than half of respondents (53 percent) have colleagues with concerns over the introduction of the technology, and 44 percent aren't confident about their own ability to adapt to work alongside the digital workforce.

The good news is, organizations feel relatively well prepared for changes and are invested in making the adoption of RPA a success. Over three-quarters of business decision makers (76 percent) feel that they are actively on the case of cultural change, incorporating the digital workforce into their daily working practices and encouraging human employees to engage with the technology.

Almost four-in-five knowledge workers (78 percent) do also believe that acquiring new skills is essential to remain employable, which may make the cultural change and adoption process of automation and RPA easier. This is proven by business decision makers (76 percent) who agree their new hires are more prepared to work alongside a digital workforce, and that adopting these technologies is an important factor in attracting and retaining the best talent.

Benefits Outweigh any ChallengesAccording to business decision makers (94 percent) and to a large extent knowledge workers (73 percent), the benefits of RPA/Intelligent Automation are well understood. However, despite this positive sentiment, there is still a significant gap in understanding between business leaders and their employees. More than three-quarters of business decision makers (76 percent) agree that their organization has been positively impacted by automation, a sentiment that mirrored by 65 percent of knowledge workers.

"Embracing RPA has been a part of the 'bank-of-the-future' objective and freeing up colleagues from mundane, repetitive tasks. We've taken the robot out of the human, in order to enable those colleagues to fulfil more purposeful roles, as we forge ahead with the next stage of our strategy," says Gerald Pullen, Head of Continuous Improvement & RPA from Lloyds Banking Group.

"This report proves that there are some dramatic changes ahead in business as far as both technology and the workforce is concerned. But it's a positive change," Bradshaw continued. "It is up to the global business community to recognize this and provide the tools that their employees most desire that will release their creativity and innovation."

To learn about how connected-RPA and Intelligent Automation are digitally transforming how businesses operate, compete and innovate attend Blue Prism World events. These events represent the largest RPA forum on the planet offering up unprecedented networking opportunities for attendees.

All interviews were conducted online during December 2018.

About Blue Prism In this digital era where start-ups are constantly disrupting markets, only the most agile and innovative enterprises survive and thrive. At Blue Prism, we pioneered Robotic Process Automation (RPA), emerging as the trusted and secure intelligent automation choice for the Fortune 500 and public-sector market. Now we bring you connected-RPA supported by the Digital Exchange (DX) app store—marrying internal entrepreneurship with the power of crowdsourced innovation.

Blue Prism's connected-RPA can automate and perform mission-critical processes, allowing your people the freedom to focus on more creative, meaningful work. More than 1,300 global customers leverage Blue Prism's digital workforce, empowering their people to automate billions of transactions while returning hundreds of millions of hours of work back to the business. Visit www.blueprism.com to learn more about Blue Prism (AIM: PRSM). 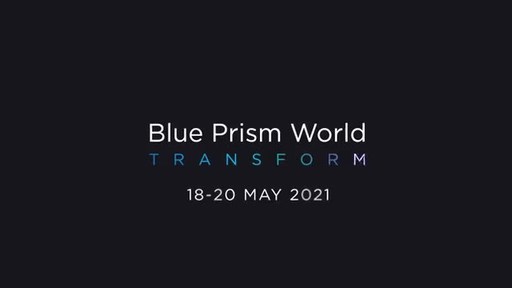 Be Intelligent About Automation, Register for Blue Prism World...