It was a historic first: Joining the over 1.39 billion Chinese nationals across the world and underpinning the strong UAE-China bilateral ties, Emaar Properties ushered in the Chinese New Year in Dubai with a dazzling dragon-themed 'Light Up' show on the iconic Burj Khalifa. 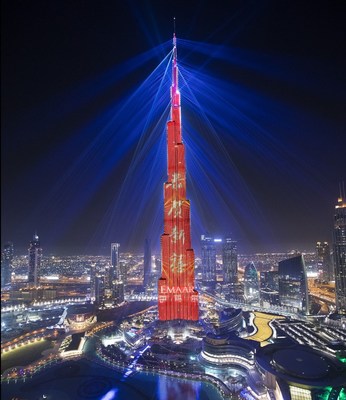 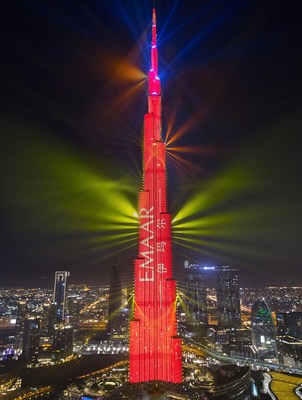 With the New Year message coming to life on the façade of Burj Khalifa, one of the most-visited global attractions by the Chinese, Emaar presented a spectacular theme-show with lights and laser, witnessed by hundreds of thousands of visitors in Downtown Dubai. Joining the celebration were the Chinese Consul-General in Dubai Li Lingbing and senior diplomats as well as Emaar's senior management.

The 'Light Up' show on Burj Khalifa started with a flying dragon taking flight from the Great Wall of China. It soared high in the sky, and toured over Dubai's landmarks including the upcoming Dubai Creek Tower before marking a splash at The Dubai Fountain.

The 'dragon' then swirled up and encircled the tower before releasing a shining pearl from its mouth to the top of Burj Khalifa's spire - at a height of 828 metres (2,716.5 feet). Shining bright atop the tower, the resplendent pearl of light was a majestic show-stopper before the 'Happy New Year' message was splashed on the façade.

The 'Light Up' Chinese New Year show on Burj Khalifa will continue from 8pm to 10pm daily until February 24, complementing the ongoing celebrations at The Dubai Mall. Several activities are lined up at the mall that take visitors on a journey through China's vast provinces with music, traditional dance, arts, crafts and cultural performances.

With over 250,000 Chinese residents in the UAE and thousands of tourists from China arriving to join the celebration, the 'Light Up' show was a perfect tribute to the cultural and trade ties that the two nations share.

Downtown Dubai and its attractions including Burj Khalifa, The Dubai Mall and The Dubai Fountain are among the most popular destinations for Chinese visitors. According to the Dubai Tourism 2017: Performance Report, Dubai welcomed over 764,000 Chinese tourists in 2017, a growth of 41 per cent over 2016, especially following the introduction of visa-on-arrivals for Chinese nationals in the UAE.