/PRNewswire/ -- mytaxi, Europe's leading e-hailing app, has unveiled a full rebuild, including a new look and feel giving customers the ability to book a new variety of updated options when taking a cab.

Passengers now will have the choice when booking their journey with Taxi XL and wheelchair accessible vehicles displayed directly at the order screen within the app. Making those booking options more prominent, gives both passengers and drivers new increased visibility of the journey needs, making the ride more comfortable and suitable for all. 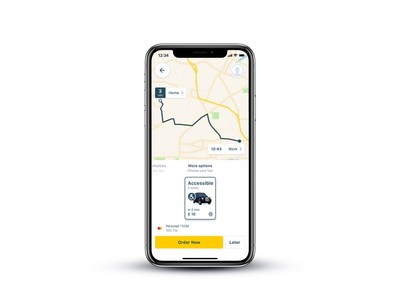 Along with the look and feel changes, the app is technically able to offer a broader variety of service types in the future.

Johannes Mewes, Chief Product Officer at mytaxi said: "mytaxi has always been about convenience, flexibility and reliability. Whilst we wanted to keep it as easy and quick as possible to order a taxi, we also wanted to display the various options we offer more prominently.

"With this rebuild, we have laid the foundation to become an even broader mobility service provider in future. In the end it is all about serving the various needs of passengers while also improving urban mobility."

David Savage, UK General Manager of mytaxi said: "The new app shows each of the types of taxi available, making it easier for people to book but also reminding people of the choice available to them. For example, black cabs have always been wheelchair accessible but not everyone is aware of this. This app rebuild is about showing passengers the options for their journey and informing drivers of the passenger's needs.

"In 2018, we have launched in six new cities in six months outside of London; Nottingham, Manchester, Brighton, Edinburgh, Oxford and Reading. The new look app, which displays the different vehicles represents a shift towards personalisation so that our passengers will find it easier to book exactly the service which suits them best."

The new update for the mytaxi app is available on iOS and android from today. While introducing a new look and feel with easier ordering options, the main purpose of the app remains the same: It directly links a passenger with a driver around the corner. On average, mytaxi users wait less than four minutes for their taxi.

The app offers in-app payment, full Google maps integration for both passengers and drivers as well as a fare estimate to calculate the costs in advance.

mytaxi was founded in June 2009 and was the world's first taxi app that established a direct connection between a passenger and a taxi driver. With more than 10 million passengers and 100,000 drivers, mytaxi is the leading taxi e-hailing app in Europe.

Mytaxi works with licensed black cabs in the UK. In 2018, we have launched in six new cities in six months outside of London; Nottingham, Manchester, Brighton, Edinburgh, Oxford and Reading.

Since September 2014, mytaxi has been part of Daimler Mobility Services GmbH (part of the Daimler Group). In July 2016, mytaxi announced a merger with Hailo, the leading taxi app in the UK and Ireland, an important step in becoming the leading taxi e-hailing app in Europe.

mytaxi today works with 500 employees in 26 offices and is available in around 100 European cities. Eckart Diepenhorst is the CEO of mytaxi. More information is available at: www.mytaxi.com