- A Declaration Delivered by Dr. Xu in a Landmark Speech on Organ Regeneration Science  During his International Golden Biatec 2013 Award Acceptance Ceremony

LOS ANGELES, Oct. 29, 2013 /PRNewswire/ -- Dr. Rongxiang Xu received the Golden Biatec 2013 International award from the Informal Economic Forum (IEF) Economic Club on October 24, 2013 during a special ceremony where he delivered an in-depth presentation on how to initiate the human body's PRC regenerative life and the kickoff of the era of applied organ regeneration science. Dr. Xu further identified that organ regeneration science offers the guarantee of health and is the highest ideal in basic and applied studies in human life science. Dr. Xu was the only international Laureate for this year's International Golden Biatec Award and was recognized for his invention of "the scientific route and solution for human organ regeneration and life extension." 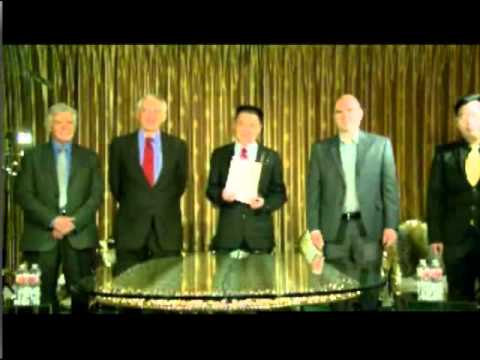 The International Golden Biatec Award is a prestigious European prize granted to international personalities who have made great contribution to international society. In the past, the Award has been given to Russian President Vladimir Putin, former U.S. President George W. Bush, former President of France Jacques Chirac, 1996 Nobel Peace Prize laureate Prof. M. Yunus, and other international leaders. The Award to Dr. Xu indicates "Applied Organ Regeneration Science" has become a top priority in the pursuit of healing and extending life for mankind. During his presentation, titled "Initiate Your Body's PRC Regenerative Life," Dr. Xu addressed in detail the coming of the era for application of human organ regeneration science.

During the Award ceremony, Dr. Xu began his discussion by providing an overview about the scientific missions announced by four former and present U.S. Presidents, Dr. Rongxiang Xu talked about the importance of entering the era for application of human organ regeneration science. He stated that: former U.S. President Nixon made a commitment in 1971 to use genes to conquer cancer. That quest was not ended until March 21, 2013, after dozens of years of study and validation, Professor Watson, the "father of gene," announced that gene therapy study is of no value which many view as the end of the gene application era. As early as 1988, the Chinese government began to promote Dr. Xu's skin organ regeneration technology by approving and popularizing his regenerative technology and therapy for burns (MEBT/MEBO) as the national new drug on the list of great national scientific and technological achievements.

In Dr. Xu's view, if the life of the human body's own PRC is initiated, then human diseases incurable by medicine will remarkably decrease, and mankind will enjoy an unexpected happier and healthier life. The energy of the human body will enhance unprecedentedly and human lifespan will be extended significantly. The fortune created by human beings will be unprecedentedly immeasurable. The world of human regenerative life will come into reality naturally.

Dr. Rongxiang Xu is the inventor and founder of "Human Body Regenerative Restoration Science" (HBRRS) and the patentee of damaged organ regeneration scientific route- a top priority claimed in President Obama's 2013 State of the Union, the inventor of patent technological route that human somatic cells convert into pluripotent stem cells and regenerate physiological tissues and organs, as well as the inventor of Potential Regenerative Cell (PRC) patent.

Image with caption: "Co-Chairmen of the Awarding Ceremony of Golden Biatec 2013: Mihok Peter, the chair of the World Chambers Federation (right), Peter Kasalovsky, the chairman of the Informal Economic Forum Economic Club Association, 1993 - 2013 (centre), Jan Gabriel, the chair of the committee of the IEF EC (left)." Image available at: http://photos.prnewswire.com/prnh/20131029/LA05947-d