STANFORD, California, June 4, 2019 /PRNewswire/ -- The newly launched SEED AWARD, a grant worth one million RMB, was presented at Stanford University Friday, inviting visionaries to employ their creative genius to shape the future of humankind.

The SEED AWARD, which is defined as "the world's first creativity award that highlights the integration between technologies and everyday life" and is sponsored by Guangzhou-based real estate Seedland Group, officially began collecting projects in May. 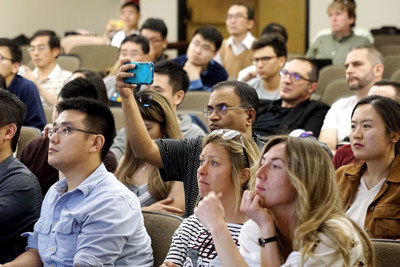 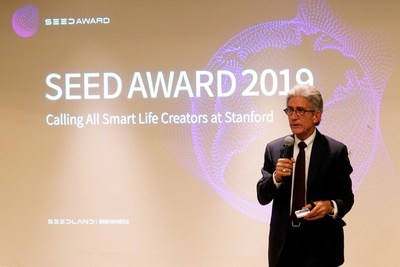 What is a smart life invention? It could be a comprehensive system to manage delivery drones dropping vast numbers of packages to customers' doors with just a few clicks on a smartphone app, which was an example given at the forum by Alison Bick, a PhD candidate at Stanford University.

The "Skycatcher" is a smart mailbox system that enables urban residents to receive drone-delivered packages direct to their apartments securely, applying drone positioning and smart logistic technologies, explained Bick, who represented the developer team with students from Stanford and China's Nantong University.

From the initial "Eureka!" moment to commercialization and availability for every consumer to benefit from the product, a process of business planning and execution must be undertaken, said Professor Yi Cui of Stanford's Department of Materials Science and Engineering and SLAC National Accelerator Laboratory in his talk at the SEED AWARD Forum held on Friday.

Based on a keen understanding of the society and market needs, technological innovation is key to providing solutions, he pointed out, citing his research on nanoscale phenomena and their applications broadly defined.

Targeting widely-used ion batteries in electronics, electric automobiles and clean energy storage for solar and wind power stations, Cui's lab at Stanford has been developing silicon-based nanowire anode materials for the battery capacity to increase tenfold and the lifespan to triple.

From an ingenious idea to improve the Li-ion battery to more than a few million batteries sold in the market, innovation is critical for turning avant-garde technologies into business success for significant improvement to human life, suggested Cui, citing his other projects on nanofilters for PM2.5 pollutants and nanoPE fibers used in thermal textiles.

From the R&D lab to a spinoff company, where the innovative solutions are implemented through manufacturing and commercialization, seed funding is indispensable for early-stage creative ideas to germinate and grow, said Professor Tom Kosnik, Adjunct Professor at Stanford Engineering, Department of MS&E.

Angel investors, super angels and micro-cap venture capitals play essential roles during the early funding stage are joined by next-generation investors in innovation centers like the Silicon Valley, said Kosnik, also a partner at FoundersX Ventures that provides investment for projects in AI, big data and robotics among the world's top labs.

Lu Zhang, Stanford alumni, analyzed the latest innovation trend in Silicon Valley at the forum. And Lu Chuyang, CEO of Fast Company China, business media partner of the award also shared his opinion; he said, "Creators will benefit from an expert mentoring program with some of the world's leading scientists and inventors to help them test and bring their creations to fruition."

The event at Stanford University is the last sharing of the SEED AWARD's global convening tour. It was presented at the University of Oxford, United Kingdom, on Monday, and Peking University, China, on Wednesday.

Several world-renowned scientists and inventors including Michael I. Jordan, named "world's most influential computer scientist" by Science magazine in 2016, and Karl Ulrich, vice-dean of Entrepreneurship & Innovation at Wharton Business School, will mentor the contestants.

The semi-final selection of the SEED AWARD will be held in North America, Asia Pacific and Europe.