SHENZHEN, China, March 13, 2018 /PRNewswire/ -- SKT Education Group has been certified as a B Corporation (B Corp) by the US-based non-profit organization B-Lab. The education group is the eighth organization in mainland China to receive the coveted certification. SKT, the first nonprofit organization in China's education field, continues to respond to the Chinese State Council's recently released "Opinion on Deepening the Reform of Education System"by following the country's education guidelines, which call for taking the comprehensive reform on education to the next level as well as promoting quality education and continuing the focus on the ethical values that are part of the course material in tandem with nurturing each student's potential as future contributors to society. With the support of leading Chinese and international academic research organizations, SKT held the launch event for the China Partnership for 21st Century Learning (CP21) and the SKT CP21 Patterns of Innovation Summit (CP21 Summit) in Guangzhou on February 26, 2018. During the event, SKT also launched the 5C model for core competency, the first set of criteria for the evaluation of talent in the 21st Century and related talent assessment solutions. 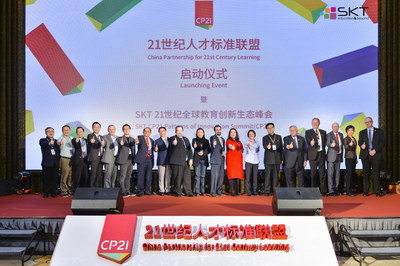 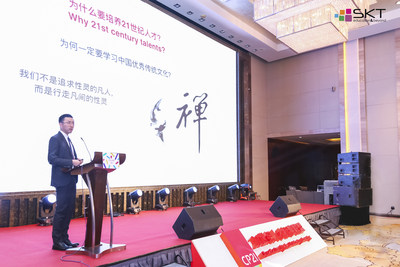 The CP21 summit, in support of China Education 30 Forum and the Special Committee of International Schools at Guangdong Study Abroad Service Association, was attended by over 200 representatives from the government, business and academic communities as well as leading Chinese secondary schools.

The CP21 summit highlighted an extensive discussion on the criteria for the evaluation of talent in the 21st century, during which participants spanning many disciplines shared their observations and insights concerning the current situation. At the event, Mr. Hou, the SKT Education & Beyond founder and CEO, shared the reasons that led him to create CP21 in the first place and why he is looking to incubate an innovative educational ecosystem for the 21st century. "Our vision is to create a holistic educational system that will not only provide talented individuals with unlimited development opportunities that enable them to fully realize their potential, but also to deliver thorough and meaningful life experiences that allow talents to operate at their full potential and empower them to through a 'learning by doing' approach. The obstacles we are now encountering include the overly narrow talent evaluation mechanism, a lack of cross-border cooperation in talent development, and insufficient efforts to inspire learners. These obstacles can be overcome by combining the research into and the application of life sciences and by taking an innovative approach to learning the traditional Chinese culture while integrating ancient wisdom in modern teaching. SKT hopes to develop innovative teaching and assessment standards by sourcing product mixes and service models for the education field of the 21st century that are based on collaboration between educational institutions, businesses and education regulators globally. By employing advanced technologies and new criteria for the evaluation of talent, SKT aims to build an innovative educational ecosystem that supports the free flow of social skills, knowledge and ideas, enabling each of the talented individuals to realize their potential and succeed by giving them access to equitable education, internships and job opportunities that resonate with their skill sets and ambitions."

Kuan Capital founder and chairman Guan Xin offered the opinion that, driven by artificial intelligence (AI), a new era where talent is seen as a form of wealth has arrived, where in-depth knowledge of the Chinese culture, coupled with advanced global capabilities, constitutes the most important qualities for a talented person in the 21st century.  He even coined a new term, new "talent wealth". He called on all sectors of society to join CP21 and collectively create an innovative global educational ecosystem as a means to promote the development of education in Chinese traditional culture as well as to address new challenges that human beings will face in the 21st century.

P21 has established a long-term exclusive strategic partnership with CP21 in China in a move to promote the development of talent evaluation criteria commensurate with what will be needed in China and the world as we proceed through the 21st century. P21 CEO, David Ross, also gave a presentation on the Framework for 21st Century Learning that was developed based on the needed qualities and capabilities of talents in the 21st century, as well as on P21's human development model based on extensive exchanges with educational institutions, businesses, communities and government agencies. In addition, P21 plans to work with CP21 to provide China's leading schools with a global presentation and cooperation platform, in addition to offering a series of educational support services for the 21st century.

SKT launches the first set of criteria for the evaluation of talent in the 21st Century: the 5C model for core quality

The academic paper entitled "The 21st Century Talent Evaluation Criteria: the 5C Model for Core Quality", co-researched and developed by the China Education Innovation Institute at Beijing Normal University, P21 and SKT, was released at the summit. The 5C model is the result of building upon the original 4C model (Critical Thinking, Creativity, Communication and Collaboration) as formulated in the Framework for 21st Century Learning. A fifth C - Cultural Competency is now added. Mr. Liu Jian, special national educational inspector and president of the China Education Innovation Institute at Beijing Normal University, said, "Cultural competency and heritage is very important for the people of a nation, and is not an issue limited to China, but rather an international topic." SKT has now conducted the first systematic test for the 5C model at the United States Academic Decathlon China (USAD China) - Assessment Center (AC) Innovation Challenge. Wang Xiaoyang, director of the Higher Education Research Institute at the Institute of Education in Tsinghua University, a representative CP21 academic research organization partner, said that the 5C talent evaluation criteria is expected to be not only highly inspirational, but also serve as a reference model for the reform of the new college entrance examination and for the independent recruitment efforts of China's top-rated universities. Wang Benzhong, president of the Beijing Shengtao Institute of Education Development and Innovation, attended the CP21 summit, where he spoke positively about the research and all the work that has gone into the 21st Century talent evaluation criteria: the 5C model for core quality, saying that he will continue to support the future concept verification of the 5C model.

The launch event of CP21 as presented by SKT chief eco-strategy officer, Ms. Liu Mei, successfully completed after the heartfelt congratulations by 16 leading Chinese and international education organizations, academic research partners, middle schools, universities and companies. CP21 will focus on jointly creating an innovative global education ecosystem for the 21st century, empowering every learner to unlock his or her personality and talent, achieve well-rounded personal development and be successful. Members and partners of CP21 promised to remain current in terms of what is happening in education, and to work together as a team to drive innovation, offer innovative educational services, and create a sustainable future for our shared humanity. CP21 will unite educational institutions, businesses, communities and government agencies as partners to integrate the 21st Century talent evaluation criteria and related meaningful solutions into primary, secondary and tertiary education. Ultimately, this coalition of cross-sector wisdom shall result in an optimal learning ecosystem for the 21st century.