LONDON, July 17, 2018 /PRNewswire/ -- The municipal government of Sanya, a coastal city in China's Hainan province, hosted a roadshow event on the heels of the roll out of non-stop air service between London and the seaside destination at Westfield Stratford City (adjacent to the Olympic Village in Stratford in East London), one of the city's most popular shopping centres, on the 13th and 14th of July. In addition to the launch of the direct flights, the Sanya Tourism Development Commission took advantage of the recent launch of favourable policies such as greater visa-free access for tourists from 59 countries arriving in Hainan as well as the unique features of local Hainan culture to enhance public awareness of Sanya, China's sole tropical seaside vacation destination. 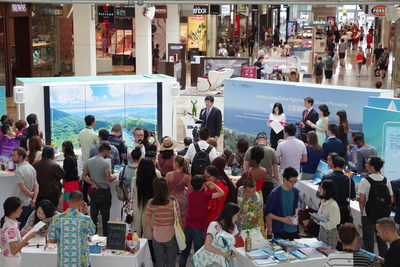 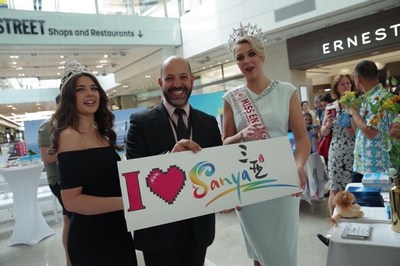 The delegation led by Mao Chaofeng, Vice Governor of Hainan province, took part in the celebrative ceremony which started at noon on July 14 and kicked off with the organisers and the guests launching paper planes together as a symbolic gesture welcoming the launch of the London-Sanya non-stop flight and expression of their expectations that the new route will help the city deepen cultural and tourism resources exchanges with London.

Sanya organized several interactive activities during the two-day roadshow, including a DIY of signature desserts and local Hainan drinks, a session on learning some basics of the Chinese language and calligraphy, with the aim of encouraging guests to become more interested in traditional Chinese culture and in some of Hainan's local fare. Guests were also invited to paint a picture of how they imagine Sanya to be on sailboard-shaped drawing boards and to take pictures and write down their names in giant passports in addition to receiving invitations to travel to Sanya. The delegation dressed in outfits featuring elements of the tropical destination as well as in traditional garb typically sported by Sanya's ethnic minorities, while promoting some of the tourism offerings and explaining the benefits of the recently approved visa-free access and of the newly-launched non-stop flight service, during the event.

The roadshow culminated in the celebrative ceremony. Representatives from Miss World, leading British tourism service operator Thomas Cook, and China National Travel Service Group's branch in the UK contributed a British touch to Sanya's promotional booth. Miss England's renditions of songs eulogizing the beauty of the Chinese tropical destination had the audience clapping and cheering as the singer concluded each number.

Sanya mayor A Dong extended an invitation to travellers from the UK, welcoming them to consider spending their next holiday at, what is viewed by many Chinese holidaymakers, as a tropical seaside paradise. The launch of the London-Sanya direct flight is Hainan's first intercontinental non-stop service following the extension of visa-free access to tourists visiting the province, a new policy that is expected to play an important role in deepening communications as well as economic, cultural and tourism resources exchanges between Hainan and the UK. Sanya will also continue to improve the tangible and the intangible aspects of its tourism industry, further enhancing the city a desirable international holiday destination for travellers from the UK and Western Europe.

Fiona Plumpton, Head of Convention Bureau Services, said Sanya is a city worth visiting and that she had gained more awareness of China via the culture, natural resources and gourmet delicacies on display at the roadshow event. She also expressed gratitude to the Sanya government for its promotional efforts. She expressed the opinion that the new non-stop route will bilaterally facilitate trade, cultural exchanges and cooperation between tourism facilities at both ends.

The two-day roadshow event succeeded in attracting a large number of people from the London area and across Britain, who took the opportunity to take in a sampling of Sanya's culture, and to get a better understanding of China's tropical paradise by the sea.