WUXI, China, April 2, 2021 /PRNewswire/ -- As a third-generation photovoltaic technology, perovskite solar cells have significant advantages, including higher efficiency, lower cost, and less capital investment, compared to conventional photovoltaics. While this cutting-edge technology is becoming a game changer in the photovoltaic industry, it has driven many countries to compete for the leading position in its commercialization. 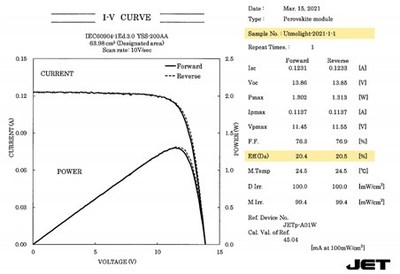 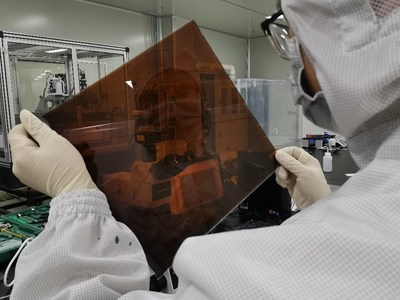 Wuxi Utmost Light Technology Co Ltd (UtmoLight), announced on Friday that it has reached a new world record of 20.5% power conversion efficiency for its mini-module with a designated area of 63.98 cm2. The result was certified by the internationally recognised test center - Japan Electrical Safety & Environment Technology Laboratories (JET). Such an efficiency currently is the highest record generated by perovskite solar modules in the world, and is already comparable to the efficiency of mainstream crystalline silicon products. This indicates that China has mastered the core technology in the field of perovskite solar modules and it is only a matter of time before the country achieving mass production.

Moreover, the Jiangsu-province based UtmoLight plans to build production lines for manufacturing large-area perovskite solar modules to accelerate the commercialization of the perovskite photovoltaic technology.

Large-area preparation is considered to be the biggest obstacle to the commercialization and mass production of perovskite technology, this explains why the technological breakthrough achieved by UtmoLight has attracted widespread attention across the industry.

Commercial mass production is imminent, with the participation of a powerful Chinese player in the perovskite solar technology

Since the technology of perovskite solar cell was introduced in 2009, the efficiency has evolved fast from 3.8 percent to 25.5 percent in 2020. With the potential of achieving even higher efficiencies and lower production costs, it has showed a huge prospect for commercialization. Therefore it has received extensive attention from the industry. Based on the opinion of many industry insiders, the overall situation of the development of perovskite technology is now quite clear, and large-scale commercial mass production is only a matter of time.

UtmoLight, which led the breakthrough of perovskite solar module efficiency, is a Chinese company focusing on the industrial development of perovskite technology. It is invested by the country's well-known Great Wall Holding Group and has gathered top experts across the world. As a competitive player in its filed, UtmoLight adheres to the vision of building a world-leading green energy company, and is committed to building a respectful resource-saving and environment-friendly enterprise. Built upon the development of perovskite technology and its industrial application, UtmoLight is advocative to generate efficient, economical and environmentally friendly green energy via active research and development efforts, to empower the industry advancement and the world's sustainable development.