BEIJING, July 2, 2021 /PRNewswire/ -- At a grand ceremony to celebrate the 100th anniversary of the founding of the Communist Party of China (CPC) on Thursday, Beijing officially announced that it has completed its goal of building a moderately prosperous society in all respects.

That marks the culmination of the Chinese people's 2,500-year journey to pursue 'Xiaokang' – a peaceful and happy life – through 100 years of diligent endeavors by the CPC as well as over four decades of relentless government work and Chinese ingenuity.

"We have realized the first centenary goal of building a moderately prosperous society in all respects," General Secretary of the CPC Central Committee Xi Jinping said at the grand gathering.

Loud cheers from the crowd in the Tian'anmen Square encapsulated the pride and exhilaration of the entire Chinese nation in reaching the hard-fought achievement.

What does a 'Xiaokang society' mean in a country of 1.4 billion people?

Rooted in China's traditional culture, "Xiaokang" is used by the CPC to describe the development goals towards which the country has been striving. Its most widely used form – "an all-around Xiaokang society" – captures the broader goals of modernization and elimination of poverty.

The concept features an "income-doubling plan," aimed at doubling the GDP and per capita income of both urban and rural residents by 2020 in comparison with 2010 levels.

China, a relatively poor country just decades ago, has become the world's second largest economy with a gross domestic product (GDP) exceeding 100 trillion yuan (about $15 trillion). Its per capita GDP has reached over $10,000, 10 times higher than in 2000 – making China one of the top middle-income countries.

The country declared victory in eradicating absolute poverty nationwide at the end of 2020, and both urban and rural residents have seen their incomes grow rapidly.

And the "moderately prosperous" ambition has gone further than meeting people's basic needs. As Xi put it on Thursday, "since the very day of its founding, the Party has made seeking happiness for the Chinese people and rejuvenation for the Chinese nation its aspiration and mission."

China's seventh national census in 2020 showed that people's level of education had steadily increased, while China's cultural industry has seen rapid growth. In 2019, it accounted for 4.5 percent of GDP, up nearly 1.7 percentage points from 2010.

In terms of resources and the environment, the proportion of clean energy has increased rapidly. In 2020, clean energy accounted for 24.3 percent of China's total energy consumption.

As China embarks on a new journey toward socialist modernization, Xi vowed that the CPC will continue to practice a people-centered philosophy of development, address the people's concerns and promote common prosperity for all.

"On the journey ahead, we must rely closely on the people to create history," he said on Thursday.

CGTN Think Tank Releases an Analytical Report on the Global... 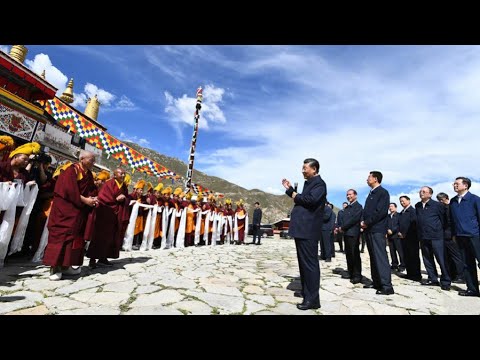