LISBON, Portugal, Nov. 3, 2017 /PRNewswire/ -- Capital Airlines was presented Outstanding Company Award by Pedro Catarino, former Portugal's ambassador to China, at the 4th Portugal-China Gala in Lisbon on November 2, 2017. The President of Portugal, Marcelo Rebelo de Sousa, presented the Outstanding Company Award to China-based Beijing Capital Airlines at the awards ceremony, highlighting the importance of the Chinese carrier's launch of non-stop service between China and Portugal and the significant contribution the service makes to promoting and facilitating cultural and economic exchanges between the two countries. 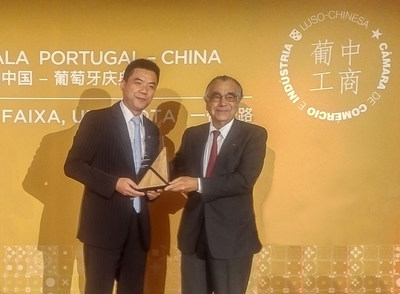 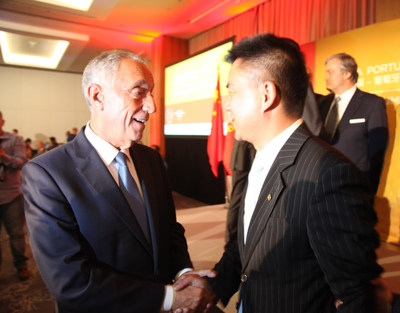 With the theme of the event focused on the support that the relationship brings to the Chinese government's One Belt, One Road initiative, the 4th Portugal-China Gala included seminars on challenges facing and opportunities awaiting Portugal as a result of taking part in the development of the New Silk Road. A high point of the gala event is the 2017 awards ceremony which recognized the significant contributions made by some of the world's most outstanding companies in promoting Sino-Portuguese bilateral partnerships and Portugal's economic growth. Mr Pedro Catarino, former Portugal's ambassador to China, presented Outstanding Company Award to China-based Beijing Capital Airlines at the ceremony, recognizing the value of the Chinese airline's non-stop service between the two countries brings to promoting bilateral economic and cultural exchanges. Chinese ambassador to Portugal Cai Run gave a speech at the event, expressing his congratulations to awards recipients and encouraging all companies devoted to Sino-Portuguese partnerships to continue their efforts in enhancing the relationship and in delivering win-win results for the two countries. More than 400 Portuguese political and business leaders took part in the event.

Mr Wu Chongyang, the President and CEO of Capital Airlines received the award and said, "The Beijing-Lisbon route is Beijing Capital Airlines' first international service between two national capitals, as well as an important step in its strategy to assist in implementing the One Belt, One Road initiative and to build a 'silk road in the sky'. The maiden voyage rolling out the non-stop service between the two cities took place on July 25, 2017. As the first non-stop route between China and Portugal, the new service has contributed to the creation of new cultural exchange platforms and a new air bridge for personnel exchanges between the two countries. The service received wide attention and positive feedback from both Chinese and Portuguese government agencies, airlines, tourism service providers and media outlets, as well as many organizations that see a benefit in further enhancing the bilateral relationship. "

Since the maiden voyage, the Beijing-Lisbon route continues to provide service three times a week, having completed 88 round trips to date. Passengers on the 13-hour flight have access to 180 degree fully flat seats in business class, a selection of Lisbon-style delicacies on the food menu coupled with premier cabin services. The feedback from the flying public has been favorable with many recommending the airline as a preferred solution. The route's average passenger load factor is 81.4 percent, with the flights having to date ferried more than 17,000 passengers between the two destinations. The route, in service now for just a little over three months, has integrated all available resources to maximize convenience for travelers transiting between Chinese cities and Lisbon, with Beijing as the key hub. Coupled with the Hangzhou-Chengdu-Madrid route, the airline has entered into partnerships with other carriers and hospitality operators serving Portugal and Spain, providing passengers with a variety of tourism options. The Beijing-Lisbon route has expanded its service footprint through code sharing with TAP Portugal and other forms of combined transport partnerships on several routes to destinations in Europe, South America and Africa. These efforts have all served to promote economic exchanges between China and Portugal, Brazil, Angola and other countries where Portuguese is the lingua franca, facilitating their ability to take part in China's One Belt, One Road initiative via the provision of fast and convenient flight services.

Beijing Capital Airlines is a joint venture between HNA Group and the Beijing municipal government, established in 2010. The airline gradually grew from a small carrier into an influential medium-sized operation, with annual revenue exceeding 10 billion yuan (approx. US$1.5 billion) and a fleet of 72 aircrafts. The airline, with seven years of experience in international operations, has launched more than 50 routes serving destinations across Europe, North America, Southeast Asia, Japan, South Korea and Australia.

On November 2, 2017, Beijing Capital Airlines held its first crew recruitment fair outside of the home market, in Lisbon, representing the first of its kind by a Chinese airline in Portugal and providing a new platform for personnel exchanges across the aviation industries of both countries. Beijing Capital Airlines aims to better service international passengers, continually improve the service quality of international routes including the Beijing-Lisbon leg and create a leading airline brand. The Chinese airline plans to continue integrating its aviation network resources, with Lisbon as the key hub connecting Europe, South America and Africa, as part of efforts to meet the expectations of countries targeted by the One Belt, One Road initiative in terms of bilateral exchanges and to promote economic growth and social development via the provision of time-saving flight services.