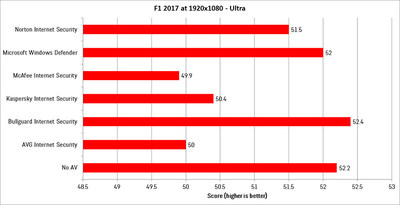 Multi-award winning cybersecurity company, BullGuard, was recently proven to be the fastest Antivirus solution for PC for gamers according to tests carried out by Chillblast, an award-winning builder of custom PCs, gaming desktops and gaming laptops.

Not only did BullGuard come out on top in 3DMark and F1 2017-based benchmarking, it also delivered better FPS performance than computers with no AV software. BullGuard doesn't just reduce the impact of antivirus on games - it actually speeds them up.

This rival-beating performance is thanks to BullGuard's patent-pending Game Booster, which optimises CPU performance for noticeably smoother gaming with a faster frame rate and no game lag.

For its tests, Chillblast wanted to use a real user's system with the sort of memory-resident software load and application set most consumers use on a day-to-day basis. They didn't feel much value would be derived from running tests on a clean installation of Windows, nor on a £5,000 Core i9 powerhouse as this hardware is not representative of a real PC. Chillblast therefore used a Chillblast Samurai 15.6" with the following specifications:

The first benchmark needs little introduction - 3DMark in its various guises has been the go-to 3D performance benchmark for two decades and professional overclockers and enthusiasts alike spend an inordinate amount of time chasing world records in each test. This was followed by a second test, this time using F1 2017. The popular racing game from Codemasters has a well-optimised 3D engine and incorporates a useful benchmark function. Chillblast performed three runs of both tests, averaging each result.

Test 1: In the 3Dmark Fire Strike, the fastest configuration of all was seen when running with BullGuard Internet Security. It roared into first place with a score of 6,650, while the antivirus-free setup trailed behind with 6,574, and even Windows Defender could only manage 6,469.

Test 2: In the F1 2017 test, the BullGuard installation once again showed the fastest FPS rate of 52.4 thanks to the Game Booster functionality. Even computers with no antivirus installed couldn't quite match BullGuard's performance, with frame rates dropping to 52.2.

"Running your Windows gaming PC with Antivirus doesn't have to impact gaming performance to any noticeable degree; if you choose the correct product," said Ben Miles, Sales Director, Chillblast. "Those wanting the best possible performance from their PC would be demonstrably best served by choosing BullGuard, based on the results of our testing."

BullGuard is a market leader in consumer cybersecurity. We make it simple to protect everything in your digital life - from your data, to your identity and your smart home. The BullGuard product portfolio extends to PCs, Macs, and Android tablet and smartphone protection, and includes internet security, comprehensive mobile security and 24/7 identity protection. BullGuard released the world's first IoT vulnerability scanner and leads the consumer cybersecurity industry in providing continuous innovation.

Dojo by BullGuard is an award-winning intelligent cyber defense system and service that provides the highest level of protection to consumers across all of their connected devices and smart homes. Dojo is the cornerstone of a smart home, ensuring a connected world where every consumer in every home, is smart, safe and protected.

All trademarks contained herein are the property of their respective owners.