New China-Austria route will be launched in October 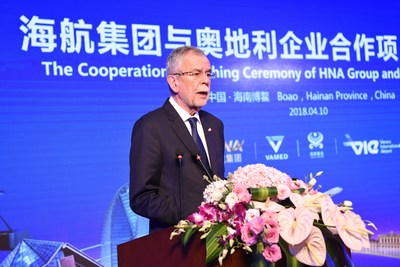 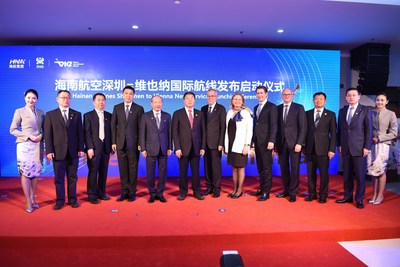 HAIKOU, China, April 11, 2018 /PRNewswire/ -- During the annual meeting of the Bo'ao Forum for Asia in 2018, Hainan Airlines Holding Co., Ltd. ("Hainan Airlines") held a press conference in Bo'ao, Hainan Province, China on the evening of April 10th, at which the company announced the launch of a nonstop service to commence in October 2018 between Shenzhen, the world capital of electronics, and Vienna, the city that holds the same reputation in the world of music. Following the roll-out of the Shenzhen-Brussels and Shenzhen-Madrid services, this is Hainan Airlines' third direct flight service from Shenzhen to Europe announced this year. The Shenzhen-Vienna route will be serviced by a Boeing 787 Dreamliner twice a week.

As a key partner of the Chinese government's Belt and Road Initiative, Austria has great expectations in terms of future cooperation where both parties plan to work together at all levels, from idea-sharing to implementation, execution and completion of projects under the initiative. "Since the establishment of diplomatic relations in 1971, Austria and China have reached cooperation in various fields such as tourism, economy, trade, and culture, which have achieved considerable progress. The launch of the Shenzhen-Vienna service is an effective step jointly taken by China and Austria to enhance the connections between the two countries, attract more Chinese tourists to Austria and promote in-depth cultural, economic and artistic exchanges among Chinese and Austrian visitors," President Van der Bellen said at the press conference.

On April 8, Hainan Airlines signed a letter of intent with Vienna International Airport in Beijing, laying a foundation for companies and organisations, both in China and Austria, to deepen and expand their cooperation. Julian Jäger, Joint CEO and COO of Vienna Airport said, "The launch of the new route with Hainan Airlines, a flagship airline of HNA Group, is an important step for the two countries to deepen their cooperation and will create new market opportunities for Vienna Airport. This partnership strengthens both regions as well as Vienna Airport's role as the gateway to Central and Eastern Europe. "

The 2018 Bo'ao Forum for Asia Annual Conference is the first major diplomatic event being held in China following the Chinese Communist Party's 19th National Congress. Hainan Airlines, the designated carrier of the conference, has made contributions to the event via its outstanding airline services in addition to the rolling out the new route between Shenzhen and Vienna, in a move to help achieve the vision of promoting exchanges and building economic relations between Asia and the rest of the world through collaborations with its partners.

"The launch of the new service between Shenzhen and Vienna, coupled with the other international nonstop routes originating from Shenzhen - to Brussels, Madrid and Sihanoukville - that we have rolled out lately this year, is expected to further the economic development of the Guangdong-Hong Kong-Macao Greater Bay Area," stated Mr. Bao, the Hainan Airlines chairman. "This year marks the 40th anniversary of China's reform and opening-up policy and the 30th anniversary of the establishment of the Hainan Special Economic Zone. As a pioneer in the Chinese civil aviation industry, Hainan Airlines has continued expanding its international airline network based on its concept of establishing a global airline network according to Chinese passengers' needs. The new service will further complement the airline's international network and contribute to the building of an air bridge as part of the Belt and Road Initiative.

With the launch of the new service, Hainan Airlines has increased the number of its international and regional routes originating from Shenzhen to 15, speeding up the city's interconnection with Europe, the US, Australia and Southeast Asia. Also this will further boost the economic development of the Guangdong-Hong Kong-Macao Greater Bay Area, a region which includes nine mainland Chinese cities, the largest of which are Guangzhou and Shenzhen, as well as two special administrative regions, Hong Kong and Macao.

Hainan Airlines has made great progress in implementing its international expansion strategy over the past few years, as part of its efforts to engage with the Belt and Road Initiative. To date, the airline has launched over 110 air routes to countries targeted by the initiative, including several new services launched during the first half of the year, among them, Haikou-Sydney, Shenzhen-Brussels, Beijing-Tijuana-Mexico City, Shenzhen-Madrid and London-Changsha.