PARIS, July 9, 2019 /PRNewswire/ -- The acquisition of Sotheby's by the telecommunications and networks tycoon, Patrick Drahi, may be seen as the Art Market's final acceptance of the digital era. 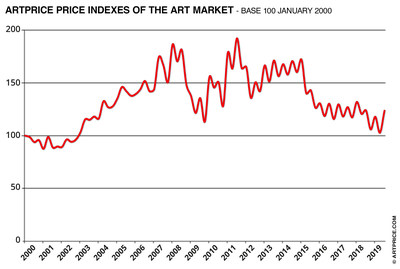 thierry Ehrmann, Artprice's Founder and CEO, explains: "In 1998, François Pinault's acquisition of Christie's brought our industry into the 'financial' era. Twenty years later, its principal rival Sotheby's is leading the 'digital' revolution. Fortunately, much of the groundwork has already been done: Artprice has long been a pioneering force in this colossal metamorphosis. Ten years ago, the famous art historian Raymonde Moulin said: "whether you like it or not, Artprice has irreversibly changed the structure of the Art Market that I have been studying for more than 50 years."

There can be no doubt that the 61% premium offered to Sotheby's shareholders reflects the immense economic potential of the Art Market, in which Sotheby's is a key player. Patrick Drahi is not the only one to see this potential since, according to the New York Post, at least two other acquisition offers have already been made: one from Wall Street (initiated by Blackstone collector and CEO Stephen Schwarzman) and the other from Sotheby's biggest shareholder, the Chinese company Taikang Asset Management.

The financialization of the Art Market has allowed the major transformation that we all know... with the arrival of new players, new strategies and new instruments. Sale guarantees, for example, have made it easier to secure the auction of masterpieces by reassuring sellers. These guaranteed minimum prices work a little like financial market derivatives: without taking the likeness too far, the guarantees may be compared with call options.

The next long-awaited step in the Art Market's evolution is its dematerialization. In 2017, Sotheby's eliminated buyer fees from its online sales… but five months later, it reintroduced them. Its financial performance was not strong enough to resist the pressure from shareholders who demanded better operating margins. The day after Sotheby's announced its forthcoming delisting from the NYSE, the French version of The Art Newspaper ran the headline "Sotheby's regains its freedom... and its secrecy."

In a context of negative or near-zero interest rates, the Art Market is more attractive than ever, with an average annual return +7% (Artprice100©).

Over the last two decades, the Art Market has gained enormously in efficiency. Admittedly, transaction costs are still high and numerous obstacles still hinder the free movement of artworks around the world; nevertheless, it has never been so fluid, or so global.

From the new record of $4 million recorded in Beijing for German artist Anselm Kiefer, to New York's latest passion for Aboriginal art (with exhibitions at the Gagosian Gallery and MoMA PS1), the Art Market has liberated itself from geo-political borders.

Buyer preferences are obviously still subject to profound geographical influences, but the Art Market has no trouble taking them account. In 2015, Sotheby's pulled the plug on its Middle East sales, preferring to hold an annual session dedicated to Middle-Eastern art in London. The operator knows that collectors from the Arabian Peninsula are perfectly happy to travel the 3250 miles that separates Doha from the British capital.

The Art Market is now ready for dematerialization... although compared to other economic segments it has a handicap of almost 30 years...

Nowadays, art amateurs, collectors, professionals and museums have access to lots of tools to help them manage their collections and their sales methods on the one hand, and to provide a global vision of the Art Market, at any time, on the other. Since 1987, Artprice has been a pioneer in this field and has developed – via the acquisition of the Swiss firm Xylogic (among others) – a complete set of decision-making tools that offer the best Art Market indicators available and reveal the latest trends in real-time. Crucially, they also allow the anticipation of price changes. Henceforth, the Art Market is now being analyzed and driven by Big Data, Data Mining, IE, AI and Blockchain. Artprice spends 80% of its expenses each year on R&D and has been awarded the Innovating Enterprise label by the French State's innovation-supporting investment bank.

thierry Ehrmann again: "Our price indices – calculated using the infallible repeat sales method, epitomise the power of our data banks, providing a comprehensive, transparent and, above all, entirely objective coverage of public art sales art around the world."

The arrival of Patrick Drahi at the helm of Sotheby's undoubtedly marks the definitive transition of the Art Market to the digital era. Two statistics in particular illustrate the extraordinary growth of the Art Market: since the end of WWII the number of art consumers and collectors has grown from roughly half a million to approximately 90 million today. Likewise with the Museum Industry: more museums were built between 2000 and late 2014 than during the previous two centuries. This rhythm is continuing today with nearly 700 new museums a year – now on five continents – for the pleasure and cultural indulgence of art lovers all over the world.

Artprice is listed on the Eurolist by Euronext Paris, SRD long only and Euroclear: 7478 - Bloomberg: PRC - Reuters: ARTF.

Founded by thierry Ehrmann (see Who's who certified Biography)(c) https://imgpublic.artprice.com/img/wp/sites/11/2019/03/2019-bio-whoswho-thierry-ehrmann.pdf).

Artprice is the global leader in art price and art index databanks. It has over 30 million indices and auction results covering more than 700,000 artists. Artprice Images® gives unlimited access to the largest Art Market resource in the world: a library of 126 million images or prints of artworks from the year 1700 to the present day, along with comments by Artprice's art historians.

Artprice permanently enriches its databanks with information from 6,300 auctioneers and it publishes a constant flow of art market trends for the world's principal news agencies and approximately 7,200 international press publications.

Artprice at the Sotheby's Institute of Art in New York: The Art...