AMSTERDAM and SAN FRANCISCO, June 3, 2014 /PRNewswire/ -- Research released today by AVG Technologies, (NYSE: AVG), the online security company™ for 187 million active users, has revealed that by the age of ten years old, most children today will have already had their first 'facts of life' talk with their parents. This is up to five years earlier than their parents' generation, the majority of whom (50 per cent) could not remember having had the conversation until the age of 15 – if at all (42 per cent). 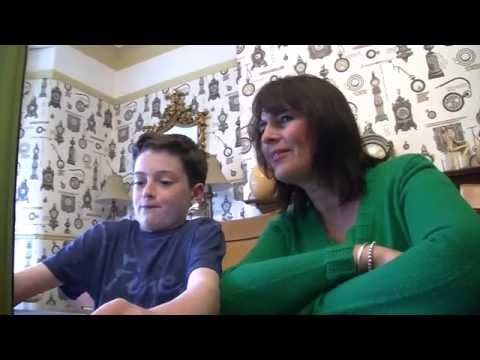 To help address such concerns, and tackle a similarly difficult discussion topic – Internet safety – in an easy and comfortable manner, AVG has created a series of interactive 'click-or-tell' digital books, called Magda and Mo. Developed with global Internet safety charity, Childnet International, the introductory book, 'The Pirate's Donut', is a fun story for young readers and their parents to read together as they guide the title characters to decide between going online themselves or asking a grown-up for help.

With AVG's research indicating confusion over how best to tackle the online safety of their children, the Magda and Mo series features clear, simple suggestions for parents of some of the most effective steps they can take. The most popular methods parents said they were currently using included forbidding their child from visiting unknown websites without asking permission (53 per cent); talking to strangers or buying items online (51 per cent each); and only allowing their child online for a set amount of time (44 per cent) – however, no single action alone was favored by the overwhelming majority.

Despite more than eight out of ten (81 per cent) parents implementing one or more restrictions, only a third (35 per cent) of the children asked alongside their parents thought that the Internet could be dangerous. The majority of parents also said that by the age of 12, they felt their child would know more than them about the Internet and one in five (19 per cent) said that this had or would have already happened by the age of nine.

"This illustrates the need to start the process of learning the dos and don'ts of the Internet at a young age, and of parents and children undertaking it together as a joint activity," said Judith Bitterli, Chief Marketing Officer, AVG Technologies. "The importance of having this conversation properly and early cannot be underestimated as connected device usage is increasing. The Magda & Mo books are part of AVG's wider aim to support families by providing useful tools that can help develop a child's understanding of how to make right choices online, as well as giving parents some practical guidance on the subject."

Methodology: An online survey of 5,420 parents and 2,569 children aged 5-10 years old was undertaken in the Australia, Brazil, Canada, Czech Republic, France, Germany, New Zealand, the United Kingdom and the United States. The survey was set up using Research Now and fieldwork took place in May 2014.

AVG is the online security company providing leading software and services to secure devices, data and people. AVG has over 187 million active users, as of March 31, 2014, using AVG's products and services including Internet security, performance optimization, and personal privacy and identity protection. By choosing AVG's products, users become part of a trusted global community that engages directly with AVG to provide feedback and offer mutual support to other customers.

All trademarks are the property of their respective owners.