GUANGZHOU, China, Dec. 7, 2017 /PRNewswire/ -- During the Fortune Global Forum held on December 6-8, Midea Group, after a series of M&A and major strategic realignment, shared its thoughts about their transformation from a conventional household appliance manufacturer to an Internet-embracing intelligent hardware company for the very first time. The vision for a convergent human-machine future pictured by the Group has drawn widespread attention from the industry. 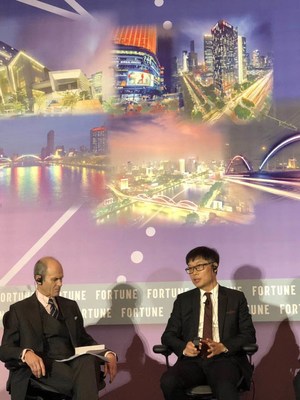 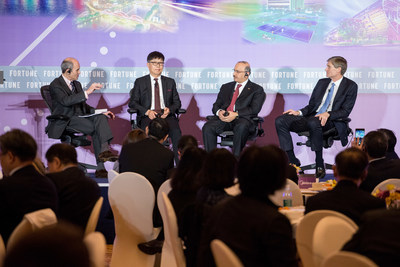 According to Mr. Paul Fang, Chairman & CEO of Midea Group, having established their "smart home and intelligent manufacturing" strategy,  the company is currently focusing on enhancing machine-learning of human's behaviors, emotions and thinking so that machines can better interact with people, Indeed, "Ahead of Life" is Midea's ultimate vision. How to free human beings from the complexities of life and production so that one could enjoy the goodness in life and focus on the more valuable imagination and innovation? Perhaps the answer lies in Midea's relentless quest for the infinite possibilities in human-machine interaction and its "smart home and intelligent manufacturing" strategy, which aims to help people revert to focusing on innovation and their enjoyment of the essence of life.

Midea's ambition to go beyond a conventional household appliance manufacturer is demonstrated in the way they are embracing the Internet, AI and robotics. They envision the creation of a new human-machine ecosystem where optimal human-machine interaction would be made possible in daily life, manufacturing, logistical and medical settings.

Mapping the Strategy for the $100-Billion Robotics Market

No one would doubt the status of the robotics industry in recent years. According to the whitepaper, "Robotics 3.0 New Ecosystem in the Era of Artificial Intelligence", jointly released by International Data Corporation (IDC) and China Academy of Information and Communications Technology, the global spending on robotics and its related services is predicted to increase from $91.5 billion in 2016 to more than twice that figure by 2020 to $188 billion. In China, state policies would support rapid development of the industry: Robotics has been explicitly identified as one of the priority sectors in the Made in China 2025 initiative, and the Report of the 19th National Congress of the Communist Party of China has also stated that they "will work faster to build China into a manufacturer of quality and develop advanced manufacturing, promote further integration of the Internet, big data, and artificial intelligence with the real economy."

Yet the tremendous market potential and favorable policies have at the same time made the robotics industry extremely competitive. To secure a foothold in this market, Midea will have to compete with not only a number of robot manufacturers that have been long in the industry, but also many ambitious Internet giants. What has made Midea, a manufacturer of domestic appliances, so confident in this pursuit of the "crown jewel of the manufacturing industry"?

The reason behind Midea's bold strategy of "smart home and intelligent manufacturing" and the establishment of the new human-machine ecosystem lies in its industry experience. One will find its long association with robotics just by examining Midea's historical milestones – Midea introduced the very first robot in 2003; in 2009, it developed its own servo motor, which has now grown to an industrial scale. The Group entered the cleaning robot category in 2013, and founded its own robotics research institute the next year. Midea sponsored and established the South China Robotics Innovation Research Institute in 2015. In the same year, the company founded a joint-venture robot company with Yaskawa, and completed the acquisition of KUKA and Servotronix earlier this year. Midea's long-time experience and expertise in roboics have enabled them to further their development of robot applications and extend the value chain.

Secondly, strong R&D and innovation strength is also a pillar of Midea's bold move. In the short span of the past five years, Midea has spent a generous total of $3 billion in its R&D efforts, and this heavily-invested innovation system has yielded preliminary success. Currently, Midea Group has mapped a total of 20 R&D institutions in countries of China, the United States, Japan, Italy, Germany and Austria. Apart from the over 10,000 R&D staff, Midea has also established extensive technical cooperation with nearly 100 world-renowned universities, research institutes and IT companies. Undoubtedly, Midea's exploration in such cutting-edge technologies as artificial intelligence (AI), chips, sensors, big data and cloud computing will make possible a more intelligent, precise, efficient and cost-effective human-machine interaction and help build an innovative ecosystem where machines and human would coexist in a convergent and collaborative way.

Thirdly, the synergies of the industrial chain cannot be underestimated. As a national brand owner that ships over 300 million units of household appliances to global users each year, Midea's own DNA in this industry can also contribute to its engagement in the robotics industry. Blessed by its huge scale in such categories as air conditioner, refrigerator, washing machine, kitchen appliances and small appliances, Midea's production lines and supporting logistics system could serve as a vast "experimental field" for industrial robots. Besides, the massive insight into the user consumption habits and the abundant ATL/BLT channel resources could facilitate the organic integration of user demand and technical possibilities, thus quickly creating a competitive edge in the field of service robots.

It can therefore be concluded that Midea's profound engagement in the robotics industry is a long-meditated sure-win strategy.

The expansion application scenarios that Midea has designed for human-machine interaction, only further prompts for greater imagination.

Over the past year, Midea Group has consecutively announced joining hands with leading domestic and foreign companies: Yaskawa, KUKA, Servotronix, Huawei, Guangzhou Pharmaceutical, Country Garden, Tencent, Alibaba and JD.com. With these key players, Midea is looking to extend the applications of human-machine collaboration to lifestyle, manufacturing, logistical and medical settings. Of course, emerging consumer demands are driving such cooperation. Smart home application will allow users to enjoy a more comfortable and care-free life based on their user habits and living scenarios; The optimal man-to-machine ratio would enable convergent human-machine collaboration and free workers from repetitive labor; consumers could enjoy premium life quality supported by intelligent manufacturing, where intelligent supply chain could generate efficient communication between the users and manufacturers; and extensive use of robots in the areas of medicine, nursing and  rehabilitation could help tackle the challenges from an aging society.

Midea's "smart home and intelligent manufacturing" strategy has gone beyond focusing on the development of a single field to building an open, interconnected and integrated robotics platform. This platform could play an active role in promoting industry convergence and enable cross-industry collaboration and technologies integration.  Mr. Paul Fang indicated, "Midea is now equipped with state-of-the-art technology that will facilitate breakthrough in artificial intelligence and next-generation manufacturing in this digital era. As a world-leading technologies group in consumer appliances, HVAC systems, robotics and automation systems, and smart supply chain (logistics), we will naturally continue to explore future-oriented human-machine collaboration."

Mr. Paul Fang also affirmed, "We at Midea believe that perfect human-machine interaction is reshaping our future." The good news here is that the future that Midea is exploring is not a simple and abrupt replacement of human for machine. Rather, it is the optimal interaction between human and machine in production and in lifestyle setting – a vision that is deemed to be the extension and sublimation of Midea's "smart home and intelligent manufacturing" strategy that was set forth in 2015.