KARAGA, Ghana, April 18, 2019 /PRNewswire/ -- The U.S.-based African Bicycle Contribution Foundation (ABCF), a 501(c)3 non-profit organization, today announced that it has distributed 75 additional, new, Eco-Ride bamboo bicycles, at no cost, to under-resourced students and teachers the Karaga Senior High School, in Karaga District, in Ghana's Northern Region. Since the foundation's inception in September 2016, it has now contributed 415 of the iconic Ghanaian-made bamboo bikes, across the country. 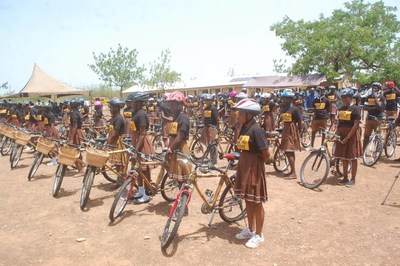 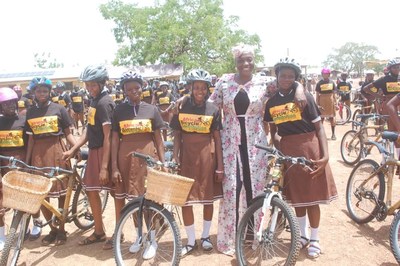 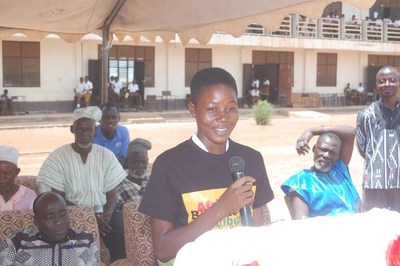 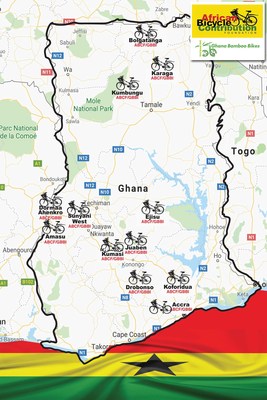 Karaga is, predominantly, a peasant farming community, where maize, groundnuts, soybeans, millet, and rice are cultivated.

Located in a district wherein the Ghanaian Statical Services has reported that 66 percent of the population has never been to school, the Karaga Senior High School has a student population of 1618 persons. It has been located in the Karaga District's Nangung community since 2009, and the average distance traveled to and from school, by its students, daily, is more than 15 miles. Given those distances, some communities in the Karaga District have recently been recording school dropout rates of 90 percent, as students transition from primary school to JHS 1.

With a population of 77,706 persons, and an average household size of 10, Karaga is classified among the poorest and most under-served districts in Ghana.

In addition, 34 percent of Northern Region households are in the nation's lowest income quintile, and the literacy rate among those who are 15 years of age, or older, is just 33 percent, as compared to Ghana's national literacy rate of 72 percent, as of 2012.

Ghana's Northern Region is also notable for its severe forms of chronic and acute malnutrition. Accordingly, 11 percent of Karaga's households are defined as moderately or severely "food insecure."

Patricia Marshall Harris, ABCF's executive director, said the foundation was, once again, especially pleased to have purchased the 75 bicycles for the current distribution, from the Kumasi-based Ghana Bamboo Bikes Initiative (GBBI).

She also emphasized that Karaga was probably one of the best places in Ghana to test the Foundation's belief that student academic performance can be improved through better access to far-flung, rural school facilities. Ms. Harris also added, "The future of Ghana, we and GBBI's CEO Bernice Dapaah all believe, is substantially dependent upon how well we can all assist the country's children to have better access to education, no matter where they happen to live, so as to be able to compete and excel throughout the 21st century."

ABCF also agrees with the findings in the 2014 Ghana Statical Services report that stressed that, left unaddressed, there will continue to be a huge gap in educational attainment between urban children and their rural counterparts. The report added that only eight percent of Ghana's urban-dwelling children had no education, while almost one in every four of the country's children who live in rural areas had no education.

The foundation is also guided by the 2018 report, "Dropout issues and Economic Implications: Evidence from Rural Ghana," which included "poverty" and "long distances to school" among major contributors to the school dropout phenomenon in the country.

Ms. Dapaah was also hopeful that the bicycle distribution program might especially improve academic, economic and social outcomes for Karaga's female students, whose achievements in those areas have been negatively impacted by the district's pregnancy rates.

ABCF officials are planning to arrive in Ghana, in July 2019, to participate in the distribution of the foundation's 500th free bamboo bicycle.

Who Is ABCF?The African Bicycle Contribution Foundation (ABCF) is a 501©3 non-profit corporation whose mission is to generate funding to underwrite the distribution of bicycles to under-resourced students, teachers, and transport-dependent small farmers and healthcare workers, in Ghana. The Corporation has made a commitment to finance the free distribution of 2500 bicycles in Ghana, over its first five years of operation.