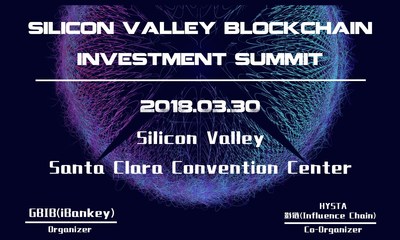 Given this background, the 2018 Global Blockchain Investment Summit jointly hosted by GBIB (iBankey), HYSTA, and Influence Chain will take place in Silicon Valley on Friday, March 30. The event will bring together blockchain technical experts, top investors, successful entrepreneurs, and seasoned lawyers to hold discussions on the frontier topics related to blockchain technologies as well as business startup and investment opportunities, aiming to promote interactions and resource sharing among industry leaders as well as to explore cooperation opportunities.

Some topics to be discussed during the summit include:

Meanwhile, the Blockchain Investment Business College created by GBIB in cooperation with leading Silicon Valley organizations will also be officially inaugurated on March 30, 2018. The first cohort of students will take a 7-day investment course delivered by top ten investors in the world. They will also take a study tour to nearly 20 companies.

This will be a major event for the world's top blockchain experts and investors to hold discussions about a phenomenon that is overwhelming the whole world!

GBIB (iBankey) is a boutique investment bank focusing on the blockchain industry. The company sees a promising future in the new economic systems created by the vertical ecosystems such as blockchain technologies, digital currencies, and exchanges, and hopes to provide help for investors and projects today in the rapidly developing blockchain industry by leveraging its expertise and global team. GBIB serves both investors and projects. Its investor services mainly include due diligence and consulting; and its project services mainly include financial consulting, strategic analysis, financing, and global market development. GBIB has a team of professional investment analysts and a large number of high-net-worth LPs. Most of its founding team members are from professional investment banks such as Goldman Sachs, JPMorgan Chase, and CICC. They have a lot of experience in finance and investment. Headquartered in Singapore, GBIB has partner investment organizations in Silicon Valley, New York, London, Toronto, and Tokyo.

Influence Chain is the world's first decentralized data engine for the value of influence. It is dedicated to using blockchain and distributed storage technologies to create a global ecosystem focusing on the value of influence. Registered in 2017, the Influence Chain Foundation is an influence platform spontaneously organized and operated by developers and enthusiasts from multiple countries around the world. Its goal is to uncover people with a public visibility or social influence in various industries and sectors, and demonstrate their value on the new dimensions through blockchain technologies. Influence Chain has created an ecosystem based on tokens as well as a value trading platform designed to serve the influence economy by leveraging the features and advantages of blockchain, so as to convert influence (personalized intellectual property right) into the digital asset of token holders. Among them, Influence Exchange (INEX) is a global application platform focusing on digital assets built by Influence Chain based on the conversion of the value of celebrity's influence. Today, Influence Chain has been successfully established in Asia and Europe. It has strategic partner organizations and teams in countries including South Korea, Thailand, Singapore, Austria, and Switzerland.